by Eleanor Rigby, TYDN Jesus Affairs Writer
LOS ANGELES (TYDN) -- Baton-wielding police garbed in heavy riot gear unleashed tear gas and rubber bullets in a once-quiet Los Angeles suburb Friday in a bid to maintain order as tens of thousands of restless pilgrims awaited a chance to glimpse Jesus who appeared in the smudge of a well-fingered iPad, TheYellowDailyNews has learned. 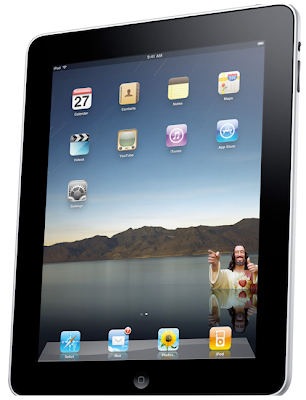 The authorities here arrested at least 85 worshippers in what was this city's biggest melee since the Rodney King riots of 1992. Dozens of others were taken to local hospitals to treat minor injuries as the crowd became restless amid concerns the Jesus smudge might accidently be wiped away.

Vatican officials, who were quickly dispatched here from Rome to verify the discovery, told TheYellowDailyNews in exclusive interviews that it was the first time Jesus' image had been discovered on an iPad, a device many had already believed was next to God. The discovery follows the Vatican's certification of Jesus images found on iPhones, tortillas, trees, pancakes, linoleum table tops, chocolate bars, foggy windows and grilled cheese sandwiches.

"Never have we seen the image of the son of God so pure and clear on such a magical device," Viktor Saintarsky, who holds the Vatican's top post in the Jesus Image Certification Department, said in an exclusive interview with TheYellowDailyNews.

The Jesus image discovery, first reported early Friday on TheYellowDailyNews' website, was found on a 14-year-old boy's iPad his parents gave him for his birthday three days before. The boy, whose name was not released because he was a juvenile, was in his third straight day of watching hardcore pornography on the device when the image appeared after he set the device down for a 15-minute break.

At least three sources close to the boy, who spoke to TheYellowDailyNews on condition of anonymity because of the sensitivity of the topic, said the boy has gone blind.

Papal scholars said the Jesus image finding came at a critical time, as the Catholic Church was considering sanctioning the wanton molestation of young girls by its priests in a bid to distance itself from running the largest man-boy, child-sex ring in history.

"This latest finding of an image of Jesus couldn't have come at a better point in the church's history," said Jonathan Blotus, an Oxford University religious historian, in an exclusive interview with TheYellowDailyNews. "It's really says a lot that the image of Jesus appeared on an iPad instead of a Kindle."