Onlookers said a melee broke out in the automotive section as thousands of shoppers clamored to purchase the $39.99 quarts that went on sale for the first time. Analysts said it was the biggest Wal-Mart stampede since Christmas, when 4 people were killed after being trampled when a Wal-Mart in Laredo, TX., offered a two-for-one special on 18-ounce bags of pork rinds. 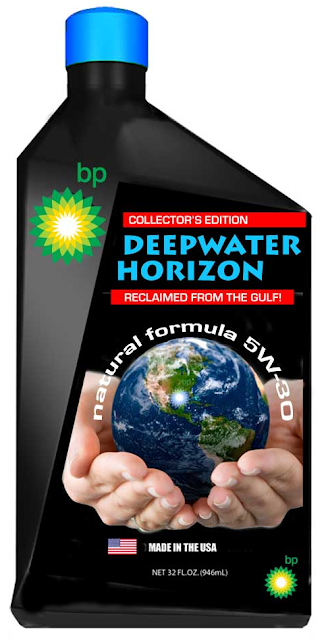 A makeshift recovery cap on the Macondo well of BP's Deepwater Horizon has recaptured hundreds of thousands of gallons of oil, some of which has been packaged in quart-sized bottles and placed on sale in selected Wal-Marts nationally. Still, the month-old spill continues unabated after a giant rubber band ball that sealed the gusher gave way days ago.

"It was bedlam," said stampede victim Jason Dorkmorstein, speaking to TheYellowDailyNews in an exclusive interview as investigators photographed footmarks on his back.

"Christ, I should have bid the $45,000 on Marilyn Monroe's chest x-rays instead," added Dorkmorstein, whose dream for a quart of the largest U.S. man-made environmental disaster was dashed.

The names of the six dead were not immediately released, pending notification of next of kin. A seventh victim, with severe boot indentations along his back, was listed in critical condition. Dozens of others were being treated at area hospitals for broken bones and concussions.

Las Vegas casinos opened wagering on when the gusher might be contained. Some casinos added an overs-and-unders parlay wager of 95 million gallons of oil spilled. The Las Vegas Gambling Commission halted wagering on whether the spill would amount to an extinction event, decrying it as a sucker bet because winners had no way of collecting their winnings.

Meanwhile, Republicans immediately blamed President Barack Obama for the Wal-Mart disaster, saying the government wasn't doing enough to contain the fallout. The Tea Party decried the melee, saying the deaths were an unfortunate result of overzealous government regulation. Democrats, for their part, opened a probe into whether BP was paying government royalties on the "Collector's Edition" quarts.