NEW YORK -- (TYDN) Tourism and city officials here were exulting Wednesday after a new study concluded the Big Apple was the No. 1 bed-bug destination, TheYellowDailyNews has learned. 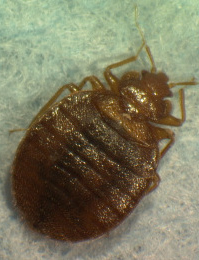 Tourism officials in cities that did not make the top-15 bed-bug destination list were left scratching their heads on how they, too, could fill up their hotel rooms amid the biggest downturn in the U.S. economy. And they applauded the efforts of Ohio, which, according to the Terminix survey results obtained by TheYellowDailyNews, listed four of the 15 top bed-bug infested cities in Ohio.

Ohio Gov. Ted Strickland, in an exclusive interview with TheYellowDailyNews, said he pressured chambers of commerce to be proactive and help hoteliers increase occupancy of nocturnal guests.

"This just goes to show that, sometimes, a public-private partnership can help spur the economy," he said. "When rooms are occupied, that stimulates the economy and creates jobs." 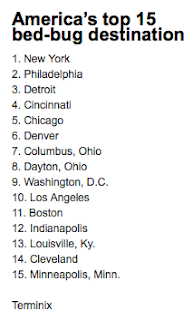 Analysts said that the Terminix survey, which has an error rate of plus or minus 3.5 occupied hotel mattresses, underscores that tourism officials are successfully attracting a new breed of occupants even as the economy sours. Bed bug vacationing is on the rise, 60 years after they were thought to have been largely extinct in the United States.

Terminix, an extermination company, compiled the top 15 list based on call volume to its offices around the country so far this year.

"It's the bed-bug occupancy in cities like Dayton and Louisville that prove bedbugs are back and can vacation anywhere," said Paul Curtis, the etymologist for Terminix, referring No. 8 and No.13 on the list.

New York City Councilwoman Christine Quinn applauded the survey concluding that the Big Apple had been deluged by bed bugs. "Make no mistake," Quinn said in an exclusive interview with TheYellowDailyNews, "our hotels are open to beg bugs and not just to lice-infested children."