by Thomas Thaw, TYDN Political Affairs Writer
WASHINGTON -- (TYDN) President Barack Obama declared as a terror nation an island of ice more than four times the size of Manhattan drifting across the Arctic Ocean after it broke from a glacier in Greenland, TheYellowDailyNews has learned. 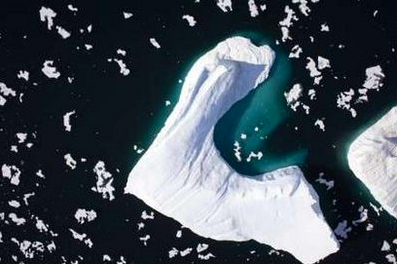 Obama said he was considering invading the 100-square-mile breakaway republic, believed to be a training ground for "eco terrorists," after Secretary of State Frank J. Zamboni failed to smooth things out.

"I urge every American to weather strip their windows and arm themselves with an ice pick," the President said in an exclusive interview with TheYellowDailyNews in the Oval Office.

Political scientists have been warning for years that U.S. foreign policy has been fomenting hate in the region, and that it was only a matter of time before an ice island would attack the United States.

"We've should have been focusing on the region's political instability instead of the impacts of Arctic global warming," Harvard scholar Jason Slurpee said in an exclusive interview with TheYellowDailyNews.

As it creeps toward the United States, potentially in the path of this rogue nation are oil platforms and shipping lanes, and any collision could do untold damage, the president said. In a worst-case scenario, the floating nation could reach heavily trafficked waters where another Greenland iceberg sank the Titanic in 1912.

Republicans immediately decried the president's actions, saying they were too little and too late.

"It's so big that you can't prevent it from drifting. You can't stop it," Newt Gingrich, the former House speaker and potential presidential candidate said in an exclusive interview with TheYellowDailyNews. "And even if this ice country is blown to smithereens, global sea levels will rise by a devastating 20 feet."