LOS ANGELES --(TYDN) The Miley Cyrus photo scandal was a clandestine ruse by the Disney Channel to up advertising revenue and increase viewership of the teen star's "Hannah Montana" show, TheYellowDailyNews has learned. 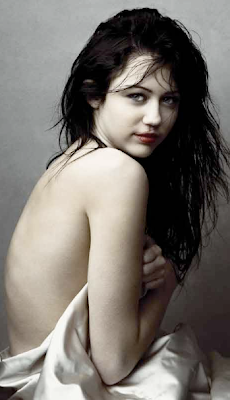 The 15-year-old bombshell posed provocatively for celebrity photographer Annie Leibovitz, prompting the young star and pop singer to proclaim this week she was "embarrassed." The episode renewed the national debate over role models, teen sex and television appropriateness.

Vanity Fair, which was paid $5 million from Disney, portrayed the teen with an unclothed back -- with her wind-blown hair and milk-white hands fondling her young breasts. The sham increased Disney Channel viewership 15 percent, according to Nielsen Media Research.

Nielsen reported that viewership jumped from zero viewers to 1 million in the coveted male category ages 19 to 48, a group advertisers target with beer, pizza, fast-food, movie and videogame commercials.

Disney executives, speaking on condition of anonymity, said targeted ad revenue to that new class of viewers equaled $20 million for the week. The ploy resulted in hijacking a huge chunk of ad revenue and viewers away from TNT, which is broadcasting the National Basketball Association playoffs daily for 40 days.

The ratings giant, Nielsen, reported that 'MileyGate,' as the Disney executives privately called it, garnered more media coverage this week than the Iraq war and the souring global economy combined.

"MileyGate got more press than we could have imagined, and paid off handsomely for us," according to one Disney executive, who spoke on condition of anonymity because he was not authorized to publicly discuss the campaign.

Louisiana State University researchers initially viewed MileyGate as a blessing for families. Fathers had begun sitting down with their children and watching "Hannah Montana" and other children's shows, a phenomenon that researchers said showed the "family unit was not disintegrating as fast as we once thought it was."

But the researchers, after expanding their survey, concluded that domestic violence spiked this week during prime time when the "Hannah Montana" show was airing. "Our survey of police reports nationwide shows that the authorities are responding to domestic violence calls every evening as if it was Super Bowl Sunday," said Jennifer Sturbergan, an LSU researcher.

The police reports, Sturbergan said, had a strikingly familiar tone.

The victims reported they were beaten by their spouses when they changed the channel from "Hannah Montana" to the NBA playoffs. The more severely beaten women, according to the LSU study, "refused to click back to the 'Hannah Montana' show."