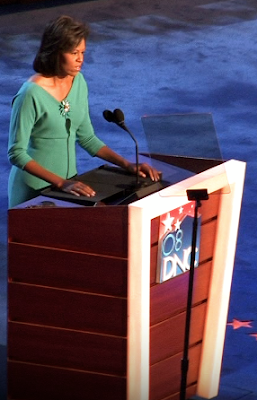 Still, analysts agree that if her husband -- Illinois Sen. Barack Obama -- is elected president, she would likely bring a new style with her. But whether that fashion sense is befitting of a first lady is an open question, analysts said, and threatens to become a political lightning rod as the November election nears.

The world was shocked during her keynote address at the Democratic National Convention here Monday evening. She steered clear of a suit -- traditional first lady convention garb. Instead, she chose a body-conscious, ocean-blue dress with beading and a brooch at the center of the open neckline -- leading many strategists to suggest she is unsuited to be the first lady.

"This smacks of the contempt that she has for America," Republican strategist George Dresslar said in an exclusive interview with TheYellowDailyNews. "This is an issue that resonates with voters."

Along with the dress, Michelle Obama's only other noticeable accessory was a pair of diamond stud earrings.

"That she wore diamond earrings, ones large enough to distance herself from the lower class, but not big enough to be upper class, shows she has class," said Jewel Nickles, a Democratic strategist, in an exclusive interview with TheYellowDailyNews. "Many middle class voters think those diamond rings are in their reach some day."

One campaign adviser, who requested anonymity and who was granted anonymity by TheYellowDailyNews, said "Michelle Obama didn't overload on jewelry like Nancy Reagan or go too plain like Pat Nixon. She struck the right balance."

Still, voters said she appeared too cocksure. "She looks like she's going to a great celebratory cocktail party," said the voter, who requested anonymity because she feared reprisals.

The dress was by Chicago-based Maria Pinto, who has outfitted Michelle Obama for several campaign and media events.

"Choosing items that are always modern and chic, Mrs. Obama possesses a natural and unpretentious sophistication, which is reflected in her clothing," Pinto's statement said.

Others, however, said that, by not wearing a suit, not wearing pearls and not wearing too much jewelry, Michelle Obama dressed like a woman -- a woman who could be an ambassador for the country -- "but not like she was interviewing for a job," according to a campaign insider.

When daughters Malia, 10, and Sasha, 7, joined her on stage here, they each wore a party dress - Malia in blue and Sasha in purple - complementing their mother's outfit.

Malia's dress had a bow front and Sasha wore a fabric flower on hers. "They looked like children," said Alanna Stang, executive editor of parenting magazine, Cookie.