Palin Weak for Failure to Shoot Humans While Hunting 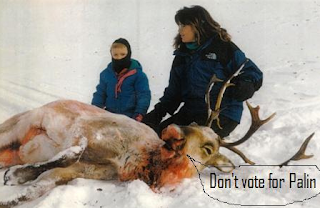 Insiders contacted by TheYellowDailyNews suggest it might have been a critical blunder for Sen. John McCain to pick the Alaska governor as his running mate for the U.S. presidency.

"She simply does not measure up to Vice President Dick Cheney," said Marvin Weasler, a strategist for the New York lobbying firm of Krill, Monger, Tilapia and Weasler. "Cheney shot and nearly killed somebody hunting and all she's ever done is aim at moose and birds and stuff."

The revelation that she's neither shot at anybody hunting nor served in the military, as first disclosed Friday by TheYellowDailyNews, is expected to be a political lighting rod as the Nov. 4 election nears. And as the Republican National Convention gets under way here Monday, her failure not even to come close to shooting somebody else while hunting is certain to resonate with Republican delegates, sources said.

In 2006, Cheney shot Harry Whittington, a 78-year-old Texas attorney, while participating in a quail hunt on a Texas ranch. Whittington was shot in the face, neck, and upper torso with birdshot pellets from a 28-gauge Perazzi shotgun.

Days later, Whittington suffered a non-fatal "silent" heart attack and atrial fibrillation due to at least one lead-shot pellet lodged in or near his heart, but survived.

According to Republican Party insiders, McCain's shocking and surprising pick Friday of Palin, a former beauty queen contestant, as his running mate was done in large part to secure Clinton supporters. Even Clinton suggested it was a good move.

"This whole Monica Lewinsky scandal probably would have been avoided had I been working side by side with her, if she was my vice president," former President Bill Clinton said in an exclusive interview with TheYellowDailyNews.

McCain, who is expected to accept the Republican Party's nomination here for president later this week, blasted the media for criticizing him over his out-of-the-blue pick of Palin and for not vetting her properly.

"I met her once and tapped her to become my veep and was expecting to learn a lot more about her from the press, but the press failed me and America," McCain said in an exclusive interview. "All I learned was that she was a runner up in the Miss Alaska contest in 1984. That she was a former city councilwoman and mayor of some Alaskan town where it barely gets dark in the summer."

Equally important, other party insiders expressed a sigh of relief late Sunday that President Bush has canceled his planned appearance here at the convention out of sympathy for the 2 million Americans being displaced by the approaching Gustav. As of late Sunday, the monster hurricane was readying to barrel down on Louisiana and New Orleans.

"Thank God for Gustav," one Republican Party insider said. "If you tell anybody I said that, I'd deny it and send you hunting with Cheney."