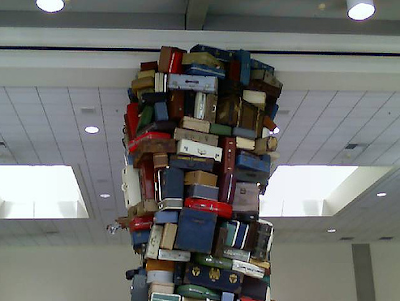 The move, in a bid to increase passenger services, came a month after the Minneapolis-based airline implemented a $35-per-bag check-in surcharge and fees for ticket purchases, ticket printing, seat and seatbelt rentals, bathroom use and toilet paper, food, alcohol, customer service and for carry-on luggage.

Complete details of the new $50 fee, first reported Saturday by TheYellowDailyNews, were still being worked out. But airline executives said they were meant to attract fliers frustrated by the high cost of driving as gasoline hovers around $4 per gallon nationally.

Another $10 on top of that guarantees Northwest delivery personnel "won't fondle or try on your wife's panties, and won't play basketball with your luggage on the tarmac," Northwest CEO Doug Steenland said in an exclusive interview with TheYellowDailyNews.

Continental, Southwest, Alaska and a host of other carriers are expected to follow Northwest's plan, which Steenland said "gives fliers a sense of wellbeing."

More than a billion bags are lost each year on U.S. flights alone.

Steenland said the new "passenger benefit," as he described it, is expected to generate as much as $50 million.

Dozens of passengers here in Duluth, whose bags were lost, were excited that they paid $50 to guarantee that their luggage would not be lost.

"I'm elated that my lost luggage isn't lost and that I paid to guarantee it won't be lost," said passenger Dick Ward, who traveled here from San Francisco to see the sites along Lake Superior.

"This should give all consumers a sense of well being," Susan Byrne, managing editor of Consumer Reports, told TheYellowDailyNews in an exclusive interview. "That your underwear won't be rifled through -- no other airline guarantees that other than Northwest."