BAGHDAD -- (TYDN) A roadside bomb killed two U.S. soldiers Wednesday in a predominantly Shiite area of Baghdad. It was the first attack against U.S. troops in the capital in nearly five hours and the first attack on civilians in the last few minutes, TheYellowDailyNews has learned. 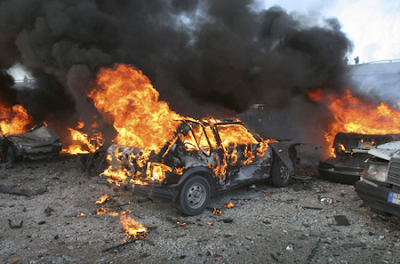 At least 100 Iraqis were killed in explosions elsewhere in the Baghdad area, Iraqi officials said, in another grim reminder of the dangers that continue to face security forces and civilians despite significant security gains over the past year.

The Bush administration hailed the carnage as a victory in the 5-year-old war. "This proves that the surge is working, that Iraq is becoming safer, and that our troops, whether dead or alive, might come home some day," President Bush said in an exclusive interview with TheYellowDailyNews. "Violence and killings always precede peace."

Iraqi President, What's His Name, also applauded the deaths and said he hoped it would be an impetus for a daylong cease-fire between Sunni, Shiite, Kurdish, Turkish and others seeking control of the capital here. "This should give us time to remove the dead before violence starts again," What's His Name said in an exclusive interview with TheYellowDailyNews. "We have been at odds with one another for centuries and this violence only means that peace is nearing."

The U.S. military said a third U.S. soldier was wounded when the blast struck a U.S. patrol about 9:30 a.m. in eastern Baghdad. The area was the site of fierce clashes and frequent roadside bombings blamed on Shiite militiamen before a cease-fire by anti-U.S. cleric Muqtada al-Sadr.

The soldiers were the first to be killed in Baghdad since earlier in the day, when a roadside bomb killed one U.S. soldier and wounded five other soldiers in the western neighborhood of Amariyah, a Sunni area.

Still, despite the peace, Iraqi politicians remained in bitter debate over a power-sharing formula for the disputed, oil-rich city of Kirkuk that has blocked passage of a law providing for provincial elections.

The Kurds object to an article in the law that would distribute equally the council seats among Arabs, Kurds and Turkomen and dilute their powers in Tamim province, which lies just south of their semiautonomous region in Iraq's north.

Tensions rose last week after a suicide bombing killed more than 20 people in Kirkuk and the Kurdish-dominated Tamim council called for the area to be annexed into the self-ruled Kurdish region. The council decision was nonbinding but provoked Turkomen and Arabs.

Bush said Democracy was about to flourish. "Our guns and presence is certain to end this bitter and centuries-long dispute between these people," the president said. "Victory is at hand."

Presidential contenders Sen. Barack Obama and John McCain declined comment, saying their opinion on the matter was subject to change.

In other attacks in Iraq: A roadside bombing killed four police officers and three civilian bystanders near an Iraqi police patrol vehicle in Mahaweel, about 35 miles south of Baghdad, Iraqi police said.

Another roadside bomb on Palestine Street, a major thoroughfare in Baghdad, killed 70 Iraqis -- soldiers and a civilians alike, said Iraqi officials, who spoke on condition of anonymity.