NEW YORK -- (TYDN) The Dow Jones Industrial Average index of 30 stocks, the widely followed indicator of stock market health since 1928, and other leading indexes are being replaced with several new trackers ranging from private prison firms to Las Vegas bookmaking facilities and brothels, TheYellowDailyNews has learned. 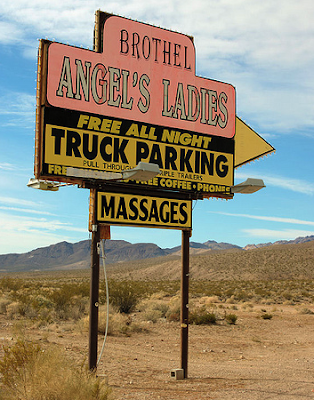 In a bid to spur investment into the ailing stock market, the government is replacing the Dow, the tech-heavy Nasdaq Composite Index and S&P 500 Index with new indexes that most Americans can relate to, according to several sources, speaking on condition of anonymity.

"With more than seven million American's in prison, about one in 100 of the population and the majority of them minorities, the creation of this tracking device is something that a large segment of the population can relate to," one Fed official said. "The United States has the world's largest per capital prison population, and this tracker is targeted at a growing segment of our population and should attract a wide swath of investment."

President-elect Barack Obama, in an exclusive interview with TheYellowDailyDailyNews, said he endorsed the plan that is expected to be unveiled as early as Wednesday on the floor here of the New York Stock Exchange. Still, Obama had some reservations.

"I'm a little concerned that the public might confuse the CellSex 20 Index with the new Brothel 69 Index," Obama said. "However, I believe the PappaNeedsANewPairofShoes13 Index of bookmaking facilities should help revive the economy and bring in investors waiting on the sidelines. The 30 Blue Chips in the Dow are so yesterday."

Lehman Bros. equity index analyst Chiapta Leven, in an exclusive interview with TheYellowDailyNews, said it might take time for institutional investors to adapt to the change. But he said he was elated the stock exchange didn't go too far.

"My sources said the exchange was seriously considering adapting a fourth tracker following the life and times of Britney Spears, Paris Hilton and Lindsay Lohan," Leven told TheYellowDailyNews. "The so-called BoobHotIndex 3 could have sparked a run on Wall Street and might have been confused with the CellSex 20 Index and the Brothel 69 Index."

The Dow closed Tuesday, its final day of indexing, at 8,419, up 270 points. Overall, advancers outweighed decliners on the Big Board by a 7-1 margin in heavy trading. The Dow is off its all-time high of 13,780 reached in September.