WASHINGTON -- (TYDN) U.S. intelligence agencies are probing whether a possible third shoe was involved in the shoe throwing incident last week when an angry journalist hurtled his shoes toward President Bush, TheYellowDailyNews has learned. 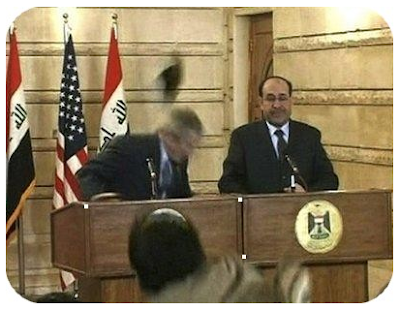 President Bush, in an exclusive interview with TheYellowDailyNews, said he easily outmaneuvered the incoming shoes that many experts said were traveling as fast as 35 mph. "I've been ducking questions at news conferences for years," Bush said.

At least nine U.S. intelligence sources, speaking to TheYellowDailyNews on condition of anonymity, said the government was investigating whether a third, so-called "magic shoe" whizzed by Bush's head during that highly publicized news conference in Iraq last week. In addition, several sources told TheYellowDailyNews that at least 15 dozen U.S. intelligence agents were examining whether the possibility of a third shoe played a role in President Kennedy's assassination four decades ago.

Intelligence analysts said it was the first time U.S. intelligence officials were actively pursuing a connection between the shoe-throwing debacle and Kennedy's so-called "magic bullet" assassination.

Intelligence officials believed the two incidents might be linked because, in both instances, there is no evidence that a "magic shoe" or "magic bullet" existed. Several sources suggested the probe was as extensive as the search for Osama bin Laden.

Last week, a Middle Eastern journalist removed his shoes and flung them at President Bush during a news conference in Iraq as Bush was praising the 50,000-plus Iraqi's killed in the Iraq war Bush started more than five years ago. Bush lauded the dead as helping save Americans from succumbing to terrorism on U.S. soil.

The Secret Service agent at Bush's side during the "Shoegate" incident was immediately reprimanded and later fired for allowing the president to face not one, but two and possibly three shoe flingings within seconds, TheYellowDailyNews has learned.

President Bush was not injured. Muntadhar al-Zeidi, a correspondent for an Iraqi-owned television station based in Cairo, Egypt, was arrested, stripped search and his feet were cut off, officials said, "so that he may never wear weapons of mass destruction again."

"This agent was trained to take a bullet for the president, not a shoe," ACLU executive director Anthony Romero said. "In addition, he might have seen what looked like a third shoe flying toward Bush. Nobody has the innate defenses to thwart three shoes cartwheeling through the air."

As a result, Bush's security apparatus is also reviewing its news conference security protocol, and has opened an inquiry into the maker of the shoes in question to determine whether the shoemaker should be charged with producing weapons of terror.