Kristofer Wrinkeladge, TYDN Reporter at Large
WASHINGTON -- (TYDN) The Bush administration is to begin regulating Santa Claus suits in the aftermath of a Christmas Eve massacre in what security experts acknowledge was the worst act of Santa Clausian terror on U.S. soil in recent memory, TheYellowDailyNews has learned.

U.S. security sources said the new regulations are in response to Wednesday's latest incident when Santa Claus shot up and burned a house in a normally tranquil Los Angeles suburb, killing nine and injuring scores of others, officials told TheYellowDailyNews on Sunday. 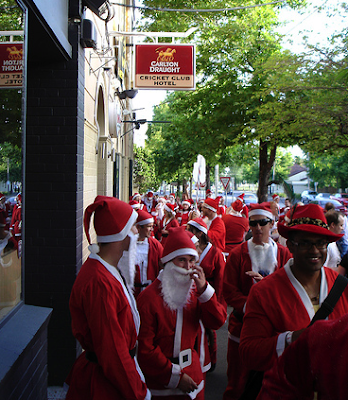 Department of Homeland Security chief, Michael Chertoff, is expected to make the announcement as early as Monday in what counter-terrorism officials said was the United States' boldest foray into combating domestic terrorism since the Sept. 11, 2001 World Trade Center attacks.

"This is expected to save perhaps tens of thousands of lives, perhaps even more lives than the ban on bringing shampoo and toothpaste onto domestic flights," one well-placed counter-terror official told TheYellowDailyNews on condition of anonymity. "The Santa Claus suit seems to be the disguise of choice for a new breed of domestic terrorists."

Critics immediately decried the regulations, which only target newly purchased Santa Claus outfits and grant amnesty to the tens of thousands of Santa Claus suits already in the country. Others questioned whether the government had enough resources to search U.S. borders and ports of call, where millions of other Santa suits are said to be in hiding.

"What this double-standard means is that, when you see Santa Claus, you don't know whether that's a domestic terrorist or just a jolly good guy underneath," said Jalen Jackstian, executive director for the Center for Santa Clausian Studies. "This is a time bomb ticking."

U.S. security officials have suspected for decades that terrorists might hide behind Santa Claus outfits, especially during the Christmas season, TheYellowDailyNews has learned. After decades of study, U.S. intelligence sources became increasingly suspicious when the suspected Santa Claus terrorists would show themselves solely during Christmas, when America has its guard down.

"After Christmas, they just vanished like cockroaches when the lights are turned on," the intelligence source told TheYellowDailyNews on condition of anonymity.

Many Americans suspected the Bush administration was complicit in the latest Santa Claus terror attack.

"I've seen these Santa Claus terrorists casing shopping malls and airports every year around Christmas and I always thought that was kind of weird," said one mall shopper, who requested anonymity and was granted anonymity by TheYellowDailyNews.

Sheila Shehman, editor of Psychology Today, said the magazine was rushing into publication what she described as a "how-to article on discussing with your children the modern-day fact that Santa might be a terrorist -- a jolly fellow plotting destruction."