President Bush, in a Christmas Eve address here in the Rose Garden, said the nation's food banks' loose policies of giving away food free was at the heart of the banking scandal that lead to the economy's collapse. 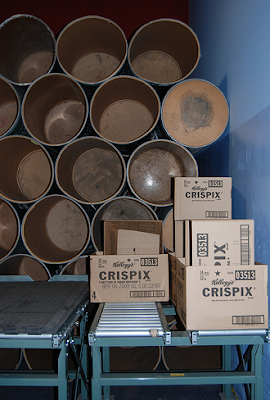 "What kind of business model is that, where these banks give away products and services and know they are not going to be repaid or can't be repaid?" Bush asked. "It just does not make any sense. That their cupboards are bare is their own fault."

Possible indictments were underway against faith-based groups which have been performing the legally questionable practice of doling out free food for decades, TheYellowDailyNews has learned.

"By refusing this $10 billion food banking bailout, we are protecting the 40 million impoverished men, women and children in this country from the predatory practices of the food bank industry," Bush said.

Administration officials said privately that a bailout would amount to the lavish enrichment of food banking executives with taxpayer dollars.

"We've heard reports where food bank leaders have actually sat down and eaten Thanksgiving meals with the downtrodden they're feeding," said one Securities and Exchange Commission official, who spoke to TheYellowDailyNews on condition of anonymity. "The U.S. taxpayer should not be saddled with providing this free gravy train to these greedy food banking executives."

Another SEC official said privately that a wide-ranging food bank investigation has uncovered evidence that some food banks were allowing their patrons to sleep on the premises for free. "Everywhere we look, we are finding food bank abuses," the official told TheYellowDailyNews on condition of anonymity.

The SEC is expected to report its findings by 2012.

Sources told TheYellowDailyNews that the investigation is expected to lob blame on liberals in government as well.

"They pushed for these banks to give away food to minorities and the under-privileged, and they knew it would never be paid back," the SEC official told TheYellowDailyNews. "This was a powder keg for the economy waiting to blow up, and it did."

Photo: a tree is nice