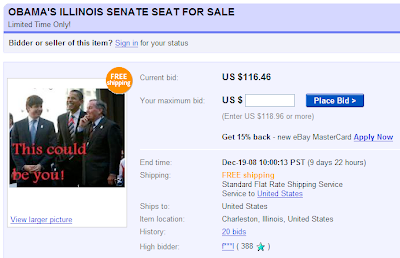 The 51-year-old two-term governor, who by Illinois law is vested with appointing a senator to fill the U.S. Senate seat Obama is vacating to assume the presidency, said in an exclusive interview with TheYellowDailyNews that his actions were "for the good of the country."

"I am bringing transparency to the political process," Blagojevich told TheYellowDailyNews in an exclusive interview here in the governor's mansion. "The only crime being committed here is that the government is accusing me of a crime and the public is buying it."

Presidential scholars said it was the first time a politician was trying to be bought on eBay. "It's usually not this transparent," Harry Jeffers, a Cal State Fullerton revisionist historian, said in an exclusive interview.

An eBay spokesman said Blagojevich's arrest underscores that eBay is the No. 1 auction site. In after hours trading, shares of eBay soared 18 cents, to $14.36.

The governor's arrest left rival online auction sites like Yahoo scrambling to secure the auction to fill Blagojevich's seat after his impeachment and imprisonment. If convicted, the governor faces a maximum 10-year prison term.

Obama, the senator from Illinois who is resigning his post to become the nation's 44th president, blasted Blagojevich for what he decried as "acts of treason against the name of politics."

"I spent more than $700 million to become president and Blagojevich wants to give away my senate seat for a few hundred thousand dollars? That's in insult to me and the voters who elected me," Obama said in an exclusive interview.

The Federal Bureau of Investigation arrested the Illinois governor here on Tuesday after an astute agent stumbled upon the auction as she was monitoring eBay traffic for sales of al-Qaeda memorabilia, sources said.

"We had several hundred agents searching for clues of the next terror attack by monitoring auctions of knockoff Osama bin Laden memorabilia on eBay," FBI director Robert Mueller told TheYellowDailyNews in an exclusive interview. "An agent mis-typed 'Osama' and spelled 'Obama' by mistake and the rest is history."

Early on during the auction, hackers from the Ukraine hijacked the eBay site and posted a bid of $99,999,999, according to an investigation by TheYellowDailyNews. But astute eBay officials regained control of the site moments before Blagojevich was to accept the bid, TheYellowDailyNews has learned.