MCMURDO STATION, Antarctica -- (TYDN) The absence of sunlight has engulfed this American scientific outpost here, where the first sunrise won't be visible for two months, TheYellowDailyNews has learned. 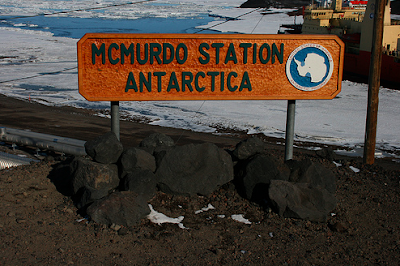 The last supplies to this scientific research hub have just arrived from Wellington, New Zealand, about 2,200 miles to the north. The remaining 125 scientists and staff, who will endure subfreezing temperatures for months, will have to make do with what the U.S. Antarctic Program has delivered.

It's a rag-tag team of patriotic male and female volunteers who stay on as a skeleton staff through one of the harshest winters on Earth. The U.S. government has sent 16,500 condoms, 150 kegs of beer, various crates of snack chips and vodka, a truckload of toilet paper, 16,500 doses of Viagra, scientific equipment and massive amounts of aspirin.

Bill Henriksen, the manager of the McMurdo base station, said he only ordered a fraction of supplies compared to past winters. "It's constantly dark here. You can't go outside and there's not that much to do," he said. "This year, we're foregoing shipments of tanning lotion, sun glasses, swim trunks, lawn mowers, the ice-making machines, ice cream and sprinkler systems."

Members of the skeleton crew said working here in the winter is not as glamorous as it might seem, according to Chuck Upton, a 34-year-old anthropologist from Southern California who studies sheep migration.

"Our beer rations aren't available each day until after noon. And do you know how embarrassing it is to ask the pharmacist for another dozen rubbers and for more hits of Viagra?" Upton asked. "Everybody knows everybody. And everybody knows that I haven't done it with anyone of them out here."

Ina Neednit, a climatologist from Chicago, said it will be her third winter here. She does not share Upton's grim view. "I just feel so beautiful, so wanted," the 300-pound Neednit said. "I just seem to glow in the absence of light."

CBS is planning a reality TV show in which it will secretly bring the skeleton crew's spouses to this remote camp, TheYellowDailyNews has learned.

Sources told TheYellowDailyNews that CBS was experimenting with a new breed of reality television, where a series is concocted not knowing its ultimate theme. One CBS executive, who spoke on condition of anonymity, said it was not clear "whether the show will devolve into another '70s swinger show or a horror film."

In the summer, the base is home to some 1,000 researchers and staff. Sunlight is not forecast until Aug. 20.