ALBERMARLE, N.C. -- (TYDN) Betty Neumar, the 76-year-old grandma jailed here and suspected of murdering five husbands over three decades, has signed a deal to publish her memoir "If I killed My Husbands (and I Didn't) Here's How I Would Have Done It," TheYellowDailyNews has learned. 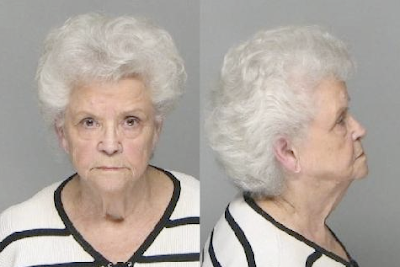 Neumar, a housewife through five husbands in this blue-collar town in North Carolina, says in the book that, if she would have killed her husbands, she would have had them "shot in the back in what was a staged home-invasion robbery," according to excerpts, obtained by TheYellowDailyNews.

Neumar, jailed on suspicion of hiring a hit man to off her fifth husband, writes, "If I wanted to have my husbands killed, I would have paid somebody, go out of town, come home and look kinda shocked when I saw them lying in a pool of blood in the kitchen."

According to police reports, her fifth husband, John Neumar, was "shot in the back in what was a staged home-invasion robbery while his wife was out of town."

The woman's attorney, Charles Krauthehiemer, said there was no relationship between the fictions "Ms. Neumar was writing in her book and what happened to her husband, John, or to her four other husbands."

Sources said the woman earned $5 million in life insurance payouts, all from Mutual of Omaha, which never questioned the five claims.

Albemarle police are crediting a veteran detective with solving the mystery.

"She looked kinda shocked when she saw John Neumar lying in a pool of blood in the kitchen when I responded to her house where she's lived for 40 years," Det. Jason Keeneye said in an exclusive interview. "She had proof she was out of town."

"Then it started to add up. I remembered that the same thing happened a few years before in the same house, and some time before that and some time before that and so on -- all in the same house and they were all shot in the back, on a pool of blood," added Keeneye, who was handed the Detective of the Year Award from the city of Albemarle. "I started getting suspicious after the fourth husband was killed the same way, in the same place, in the kitchen. The fifth time just pushed me over the cliff."

In an exclusive jailhouse interview with TheYellowDailyNews, Betty Neumar, her balding gray hair draping her orange jail jumpsuit, said she was innocent. She added that she was engaged to marry a sixth husband, but the wedding was called off after she discovered him "lying in a pool of blood in the kitchen after I returned home from being out of town."

"He was a victim of a home-invasion robbery," she said.