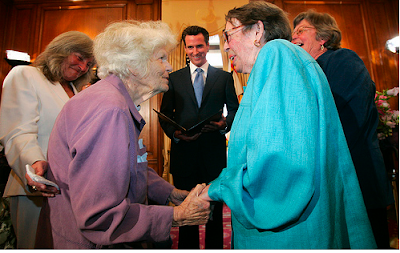 On Monday, the partners of 55 years were the first to marry under a California Supreme Court decision overturning state law allowing only opposite-sex couples to tie the knot. Thousands of other same-sex couples across the Golden State also wedded.

The marriage was 18 hours old.

"It wasn't long until after she said, 'I do,' that she turned into a raving bitch," Lyon, 83, told TheYellowDailyNews in an exclusive interview here. "And then that arm fat, her arm fat looked like it grew inches during the ceremony."

For her part, Martin, 87, who now uses a wheelchair, said she suspected her new wife married her for her money.

"Jesus Christ, I barely kissed the bride and suddenly she started ringing up my credit card like money grew on trees," Martin said. "What really pissed me off was the plywood coffin she ordered for me on overnight delivery."

"One of them wanted to move the couch and re-arrange some furniture, I can't remember who, and the other just broke down, saying she couldn't live under these conditions anymore, that she wanted to see other people," an officer who responded to the scene, who requested anonymity because he was not authorized to speak to the media, told TheYellowDailyNews.

"They just started throwing stuff, and screaming, 'I'm sick of you. Get out and I hate your parents,'" the officer said.

The divorce papers, obtained by TheYellowDailyNews, cited "irreconcilable differences" as grounds for the divorce.

After Massachusetts, California became the nation's second state to allow same-sex marriage. California's same-sex nuptials, which were sanctioned to begin at 5:01 p.m. on Monday, were a result of Lyon and Martin suing, claiming they should be treated the same as opposite-sex couples.