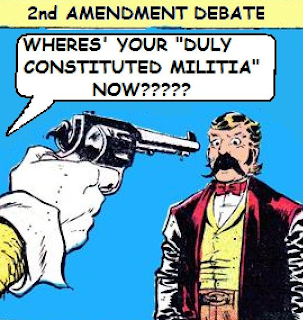 The justices' 5-4 Thursday decision, split along party lines, is expected to embolden Americans wanting to express themselves who had remained silent because they were unarmed. Under the high court's decision, which said individuals had an almost absolute right to carry weapons unrelated to service in a state-run militia, persons with views outside the mainstream now will more likely utter their speech.

"The ability to carry weapons, like at the beach, at a sports stadium and even at the local Parents Teachers Association meeting will energize the national discussion," American Civil Liberties Union director Anthony Romero said. "Throughout history, people have been sheepish in standing up for what they believed. Now they have the Constitution, perhaps in the form of a concealed handgun, on their side backing up their opinion."

It was the first time in the nation's history that the Supreme Court has ruled that individuals have a right to weapons. The Second Amendment reads: "A well regulated militia, being necessary to the security of a free State, the right of the people to keep and bear Arms, shall not be infringed."

The National Rifle Association, which won the ruling after challenging a handgun ban in the District of Columbia, said the decision protects the weak by empowering the meagerly minded to have their voices heard. A side benefit to the far-reaching decision, according to the NRA, would be a safer, yet more talkative, America.

"A lot of people are going to say what's on their minds now because the justices said it's OK to have a Smith & Wesson in their toddler's diaper bag," said NRA lobbyist Christopher Cox. "But these gun enthusiasts are less likely to draw that Smith & Wesson knowing that the person they're speaking their mind to has got perhaps an even larger Smith & Wesson."

Groups representing the mentally ill derided the decision because it left intact federal and state rules prohibiting their clients from weapons ownership -- an infringement on their First Amendment right to free speech.

"This ruling basically stands for the proposition that nobody wants to hear from the mentally disabled," Disability Rights Advocates attorney Sid Wolinsky said in an exclusive interview with TheYellowDailyNews. "Once again, the voices of the disabled have been pistol whipped by the courts."

Advocates for Convicted Felons spokesman Jack Derringer said the ruling vindicates a large swath of the group's constituents who had been sentenced to lengthy prison terms for "what now seems like the absurd crime of possessing or discharging firearms to back up their First Amendment rights."

The First Amendment says "Congress shall make no law respecting an establishment of religion, or prohibiting the free exercise thereof; or abridging the freedom of speech, or of the press; or the right of the people peaceably to assemble, and to petition the Government for a redress of grievances."