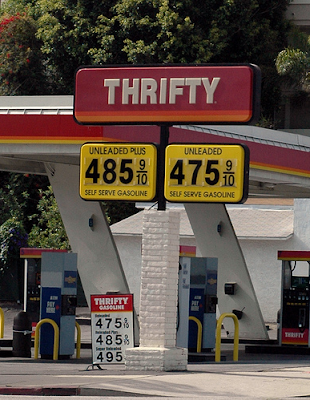 The AFL-CIO is haggling with the nation's largest oil concerns in a bid to unionize these workers, who battle frigid temperatures, snow, rain, fog, wind and the boiling heat to keep motorists informed of the always changing price of gasoline -- all for meager wages of about $6.25 hourly.

Some marquee sign changers must climb shaky ladders while braving extreme heights. All the while, they succumb to the screams from their supervisors and they are also victims of constant threats from angry motorists when these sign changers meticulously rearrange the plastic numbers to reflect skyrocketing gas prices that are eroding the American Dream.

The Justice Department was mulling whether to declare acts of violence against gas station marquee sign changers a hate crime after a motorist got out of his car and kicked the ladder from under a sign changer, causing the sign changer to plummet 25 feet and breaking both legs at an Arkansas gas station last week. The American Civil Liberties Union was strongly lobbying against the proposal, which increases any crime's penalty up to five years if directed at a marquee sign changer.

"This legislation doesn't make a distinction to when the sign changer is on or off the job," ACLU spokeswoman Norma Mailanandra said in an exclusive interview. "Does this mean that if I rob a marquee sign changer who is working the cash register, not knowing he is a marquee sign changer, I'm going to get rung up with extra time? That's a First Amendment violation of the highest order."

When President Bush took office in 2001, the average nationwide price for a gallon of regular unleaded was $1.46 a gallon and remained steady. Today, gas nervously hovers at $4 a gallon.

Until recently, marquee sign changing was among the plumb assignments for gas station attendants, a dangerous duty usually exercised once a day and sometimes getting these brave minimum-wage soldiers out of bathroom-cleanup duty.

But that plush lifestyle is now eroding along with the American Dream as speculators and the world's petroleum companies -- fearing the apocalypse, endless war and famine -- have pushed the price of a barrel to record levels of $130, with prices endlessly fluctuating throughout the day.

Several sign changers nationwide told reporters from TheYellowDailyNews that they're now forced to recast gas prices all day long, regardless of the weather. Many are suffering unusual shoulder and hand pain from what some experts say mirrors carpal tunnel-like complications. Other sign changers are suffering the psychological toll of being verbally accosted by motorists unhappy with the cost of gas.

"There I was, for the tenth time that day, in the blistering cold and howling wind, on a 10-foot ladder changing the price when this drunken dude driving an old Ford green pickup started yelling that he was gonna kidnap my daughter and perform unspeakable acts on her," said one ExxonMobil marquee sign changer, who spoke on condition of anonymity because he feared he could lose his job for publicizing the event that happened last week outside a South-Central gas station here.

What's more, hundreds of marquee sign changers have been fired, or demoted to bathroom-cleaning duties, after complaining about the dangerous and unhealthy conditions. The AFL-CIO is attempting to unionize the nation's estimated 22,457 marquee sign changers in a bid to get better wages and less ladder time, union sources familiar with the matter told TheYellowDailyNews.

"These marquee sign changers are the forgotten heroes in the oil wars who brave the elements, and when they complain, they're being fired in unprecedented numbers and in violation of federal law," one union source said.

"These marquee sign changers are greedy, and are the cause of the spike in gas prices," said the executive, who spoke on condition of anonymity because he has not been authorized to discuss the real reasons for high gas prices.