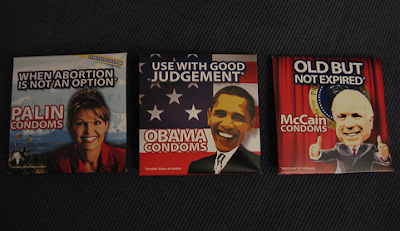 WASHINGTON -- (TYDN) Republican presidential nominee Sen. John McCain is set to propose what campaign aides describe as "the truest sin tax ever," a $5 surcharge on every condom, TheYellowDailyNews has learned.

The Arizona senator is expected to announce the far-reaching plan at a news conference here Friday, campaign operatives said late Thursday. Some insiders said the controversial proposal was less about revenue generation than it was to deter Americans from having sex for purposes other than reproduction.

The sources also likened the move as a form of so-called social Darwinism, by which the tax would likely spawn a new generation of impoverished Americans who would acquiesce to being reared with "any sense of a realistic expectation that they would live better than their parents, and not to expect it anymore."

"Obviously, this will impact the poor, who will likely forgo condoms and reproduce a newer, low-wage population that will have no expectations of being better off than the previous generation, and this is what the Republican Party, and, frankly, the Democratic Party are capitalizing on," a McCain insider, requesting anonymity because she has not been authorized to disclose the philosophy behind the tax, told TheYellowDailyNews in an exclusive interview.

"Alcohol and tobacco is what we usually associate with as sin taxes," the source said. "This tax is the truest sin tax ever."

Still, there's a rift among the McCain campaign over the proposal.

Other McCain insiders suggested the idea was among the most advanced in history to reduce global warning while being mindful not to associate the tax with China's one-person-per-family rule or Hitler's Nazi Germany. They suggested that the tax would put condoms outside the reach of many Americans, who would forego intercourse and slow population growth -- all of which would purify the environment.

"This tax is a win-win, and we're openly using the term tax," another McCain insider told TheYellowDailyNews, who spoke on condition of anonymity. "How many candidates can say 'tax' with a straight face?"

Sen. Barack Obama, the Democrats' candidate for president, is considering a smaller "surcharge" for each condom, perhaps at the $4 level, Obama aides said. One aide said, however, that Obama operatives are having a difficult time getting the Illinois senator to commit.

"He sees everything as black or white," said the aide, in an exclusive interview with TheYellowDailyNews. "Sometimes it's black and sometimes it's white. It's hard for him to go middle of the road."

Pope Benedict XVI criticized the plan, saying it would have little effect on the Church's unmarried followers because they already practice abstinence. "And our ordained members, the priests," the pontiff added, "have sex with under-aged boys incapable of being impregnated."