SOUTH BEACH, Miami -- (TYDN) Singer, actress and model Jennifer Lopez was rushed to a local hospital here after her buttocks caught fire at a night club party, TheYellowDailyNews has learned. 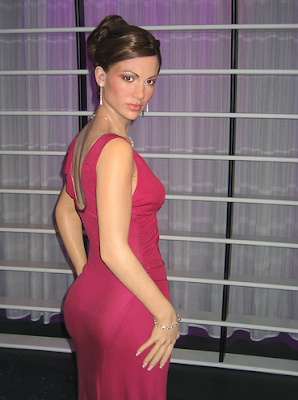 The actress, who Playboy magazine rated as having the "hottest" buttocks in Hollywood, was dancing at Café Polozonoblo when her buttocks suddenly turned into a raging conflagration late Sunday, witnesses said.

"I was having a beer and staring at her buttocks while she was swirling around on the dance floor and I was thinking, 'I definitely want a piece of that,' and suddenly her buttocks ignited," partygoer James Wilson said. "Her buttocks were so smoking hot; they just started flaming right there before my eyes."

Other witnesses said dozens of partygoers were trampled when J.Lo's entourage rushed the Latin sensation from the club. Internet chat sites were filled with discussions on whether the flames marked an end of an era.

Investigators from Barclays Insurance Group PLC, which has insured Lopez' buttocks for $1 billion, immediately dispatched to the scene as many as 20 investigators from its Assets Department. One South Beach police official, speaking on condition of anonymity because he has not been authorized to publicize the investigation, said dozens of South Beach Fire Department investigators are scrutinizing the blaze.

"A lot of the guys immediately stepped up to probe this," the police official said. "They hope to get to the bottom soon."

A spokesman for the Our Lady the Mercy Hospital in South Beach said Lopez's husband, Latin music sensation Marc Anthony, was at the 38-year-old star's bedside. The actress, popularly nicknamed J.Lo, "is recovering from severe burns on her buttocks," said hospital spokeswoman Nila Forlorn.

Forlorn declined to provide details about the severity of the burns and whether both cheeks fell victim. J.Lo spokesman Haklan Roswellio also declined to give details, but said there was some discord with the medical staff on how to treat Lopez.

The National Inquirer posted on its website a picture of what appeared to capture the moment Lopez's buttocks became engulfed in flames. Paparazzi photographer Burt Bunseyedo, in an exclusive interview with TheYellowDailyNews, said it was a picture of a lifetime.

"My lens has been trained on her buttocks for years," Bunseyedo said. "Her buttocks literally combusted. I think many of us knew this would happen."