HANOI, Vietnam -- (TYDN) Sen. John McCain will accept the Republican Party nomination for U.S. president and will go on the ticket absent a vice-presidential running mate, TheYellowDailyNews has learned. 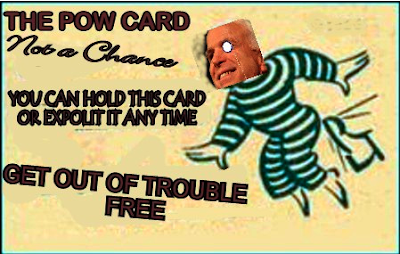 Four McCain campaign operatives, speaking on condition of anonymity because they have not been authorized to publicize the strategy, said the Arizona senator is expected to announce in Hanoi, Vietnam, that he is going solo perhaps as early as Wednesday.

"It's more than just the senator knowing that nobody believes in God as much as he does," one McCain operative told TheYellowDailyNews late Tuesday. "He doesn't think anybody else has killed as many people, as many enemies of the United States as he has. He doesn't want to be seen as coddling to the weak."

Revisionist historians said it was the first time in the republic's history that a presidential candidate has declined a vice president to appear alongside on the ballot. While some historians suggested the approach verged on despotism, others said it was a natural evolutionary flow following President Bush's two terms in office.

"There's nobody there to bring McCain the candidate down in this election," USC historian Farquadia Marumama said in an exclusive interview. "For eight years, Bush lived under the shadow of what's his name, Dick Cheney, the vice president, that dead guy behind the curtain that nobody has seen alive for years, but a guy many thought was pulling the strings."

Another McCain operative, speaking on condition of anonymity, said McCain would deliver the news in a makeshift bamboo cage outside Hanoi here, where he was held captive during the Vietnam War for five years. The candidate, the operative said, is expected to tell a news conference that any potential running mate "could never live up to my love for country, the thirst to kill for that country and my love for Jesus."

Strategists said the move has pushed into a corner McCain's rival, Sen. Barack Obama, the Democratic nominee for president. The Illinois senator, who just defeated New York Sen. Hillary Clinton in the primary, has not made up his mind whether he, too, would go solo during the November election.

Several Obama strategists, speaking on condition of anonymity, said the country's first black man on a major presidential party ticket was mulling a female running mate. But the strategists and Obama are unsure whether Clinton is the right choice, although many strategists suggest she would solidify the ticket.

"We're considering a white woman, a lesbian, somebody with broad appeal who gave birth to a black child after divorcing a Muslim man who beat her, didn't allow her to drive and beat her again after she drove to church and later converted to Judaism," one Obama operative said. "She must have dabbled in pornography, been victimized in a nunnery, practiced criminal defense and later quit the bar to adopt Chinese children while working at a convenience store in Middle America who shot at least two armed robbers with an unregistered handgun she carried in her overalls."