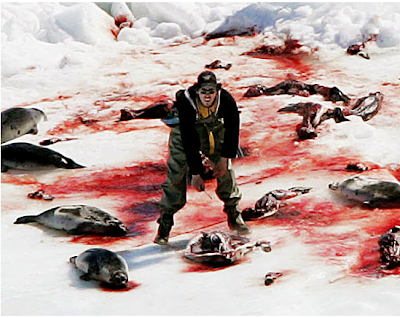 Anti-hunt campaigners say Canada's seal hunts are cruel and inhumane because hunters use spiked clubs and rifles to kill the animals for their prized pelts. Still, animal rights groups said they would be willing to cede to an increase in the annual slaughter if hunters practiced more humane killing methods.

People for the Ethical Treatment of Animals, or PETA, is demanding that hunters first blindfold the furry animals and offer them a cigarette before they are pummeled to death, their hides removed and their flesh and innards left to rot in the snow.

"Our survey of death row inmates who have been blindfolded and given a cigarette before their execution said their electrocution or lethal injection was more relaxing than without such amenities," PETA president Ingrid Newkirk said in an exclusive interview with TheYellowDailyNews.

The PETA study was first reported Monday by TheYellowDailyNews.

Harry VanPelt, chairman of SlaughterNow!, said cigarettes were too expensive. He promised the hunters would briefly pet the seals, say "You're a good boy, yes you are" before they were splattered on the frozen tundra.

The Tobacco Family Children No Abuse Forum Coalition also blasted PETA's proposal. "Seals that survive the slaughter might get hooked on cigarettes and die an early death from lung cancer," Patch Tokem, the coalition's spokesman, said in an exclusive interview with TheYellowDailyNews.

Federal Fisheries Minister Loyola Hearn said the growth of the grey seal herd is widely recognized and his office is discussing the issue with the province's fisheries minister Ron Chisholm. Chisholm asked last week for the quota review and also urged the government to press the European Union to reject a proposed ban on the import of seal products.

Under legislation proposed earlier this month, the EU's 27-member states would ban seal products from countries where hunting practices are deemed inhumane.

Chisholm is mulling whether to demand hunters offer seals a choice of a cigar or cigarette, in addition to a last meal. He is also considering proposals to ban rifles and clubs in favor hunters' fists.

Nova Scotia has a yearly quota of 12,000 gray seals but fishermen want the quota increased to 25,000. A fast growing grey seal population is depleting fish stocks.

The United States banned Canadian seal products in 1972. Several European Union nations, such as the Netherlands and Belgium, ban all seal products.