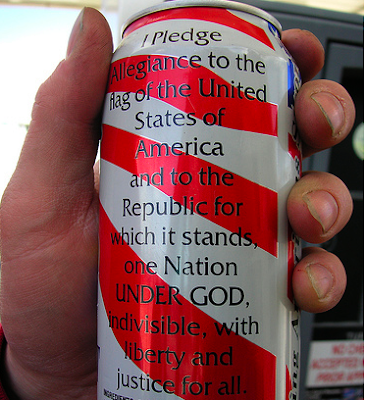 The investigation, the most exhaustive in the Pledge of Allegiance utterance sphere, concluded that McCain, the Arizona senator, uttered the pledge 25,915 times compared to Obama, the Illinois senator who the probe concluded uttered it only 16,425 times.

The analysis, with a margin of error of 9 percentage points, is expected to be key fodder in the patriotism debate engulfing the campaign as each candidate jockeys to shore up the patriotism vote ahead of the November election.

Republicans seized on the far-reaching analysis, saying the numbers proved McCain is more patriotic than Obama. They said the report demonstrates McCain is the better choice to lead the nation in the war in Iraq, and to fix an economy in recession while undoing record oil prices and home foreclosures.

Obama spokesman Dexter Mulligan blasted the survey, saying TheYellowDailyNews should "do it over and do its homework."

"Mr. Obama has been uttering the pledge in a whisper almost nonstop for months, which should boost his numbers by the thousands," Mulligan said. "This is the yellowiest form of journalism I've ever seen."

Fox News' Bill O'Reilly suggested that Obama, in a bid to run up his pledge utterance numbers, often would gloss over words like "under God."

In an exclusive interview, Obama denied the allegations, which were first reported late Tuesday on TheYellowDailyNews' website. "I admit that I was trying to increase my Pledge of Allegiance utterances output," Obama said in a telephone interview. "I love God just as much as Mr. McCain. "Jesus Christ, I swear I said 'under God.'"

In response, Pope Benedict XVI, in a communique issued from the Vatican and obtained by TheYellowDailyNews, urged the nation's Catholics to shun Obama. "He thinks it's OK to say the Lord's name in vain," the pontiff wrote.

Some statisticians decried the survey for it failing to note that McCain, at age 71, is 25 years older than the 46-year-old Obama, giving him a huge time advantage to rack up his Pledge of Allegiance utterance numbers.

Linguists were also analyzing the study's methodology. They were concerned the report may have misinterpreted the number of Pledge of Allegiance utterances McCain's Vietnam captors reported to researchers.

"We're reviewing the interviews the researchers had with McCain's captors and are concerned that they may have mistaken what they thought were repeated utterances of the Pledge Allegiance," said Dick Lingolo, a Harvard University professor of English. "Our preliminary analysis suggests McCain was muttering to his captors something like, 'If I survive, I pledge to shove a Napalm bomb up you and your gook family's derrieres.'"