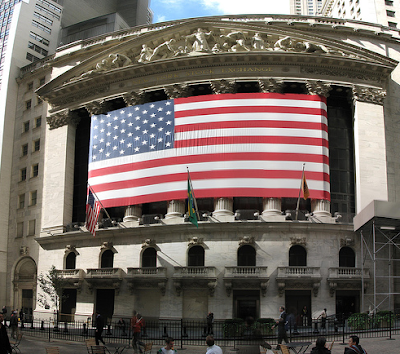 The purchase also calls for the doubling of valuation of every share issued to lawmakers, corporate executives and their board members. The deal follows the $700 billion bailout of Wall Street investment firms, the $100 billion bailout of American Insurance Group, the government's $200 billion takeover of the nation's mortgage industry and the $25 million bailout of the U.S. auto industry.

"Private profits with public risk is the American Way. And under my leadership, the economy is under total control," President Bush said as he rang the exchange's opening bell. "These facts should stoke massive confidence in the free market at home and abroad. "

The House and Senate approved the stock market's purchase after suspending deforestation rules. The suspension provided for the immediate cutting of ancient redwoods in Northern California to secure a paper source large enough to feed U.S. Mint printing presses.

"The environmentalists, as always, were fighting us on this and putting these centuries-old trees above innovation and the economy," Bush told TheYellowDailyNews in an exclusive interview. "Where do these environmentalists think money comes from?"

Bush advisers, meanwhile, were meeting here with New York Mayor Michael Bloomberg. Administration sources, speaking on condition of anonymity, were seeking guidance about whether Bush should suspend the U.S. Constitution to remain in office for a third term "to continue steering the nation's prosperity."

The Dow Jones Industrial Average soured 5 points on news of the exchange's takeover. On Thursday, the Dow tumbled 679 points to its lowest level in five years.

The Dow has lost 5,585 points, or 39.4 percent in response to the nation slowly coming to uncertain grips that Bush's popular presidency is ending in January, analysts said.

"The public is deeply concerned that a Barack Obama or a John McCain is going to assume the presidency and muck up the economy and the country's standing as the leader in free-market principles," said Harold Jeffries, a California State University Fullerton revisionist historian. "Under Bush, the federal government is in complete control of the economy."