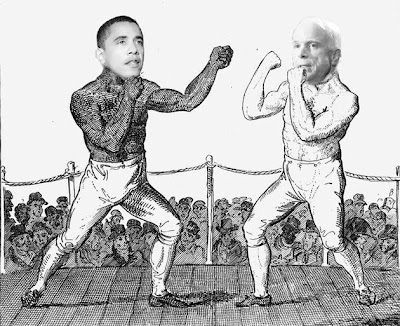 During an early round, as the crowd began repeatedly shouting "700 billion dollar bailout," the referee stepped in to untangle the two after each kept screaming "I'm for more regulation than you. I'm the true regulator."

McCain came out swinging, landing a right-handed blow when he blamed his Democratic challenger and his liberal, trickle-up party for creating the financial crisis by wanting "to give home loans to the middle class at taxpayers' expense."

Obama regained his composure, landing a left-handed uppercut when he chided his Republican challenger and his trickle-down party for "creating the financial crisis by being in bed with Wall Street executives, for lighting their cigars with $100 bills at taxpayers' expense."

Ringside analysts, however, said the fight appeared to be staged like a World Wrestling Entertainment match. They said there did not appear to be any substance in the candidates' blows.

"They were certainly throwing blows, but none of them were landing," said boxing analyst Al Pugilis, in an exclusive interview with TheYellowDailyNews. "It really looked like they were wailing on each other. But it took a few minutes before it started to become clear there was really nothing behind their punches."

A few rounds later, when it came to taxes, Obama looked like he landed a powerful blow to McCain's belly when Obama said, "I promise to waste less middle-class taxpayer money than you."

But McCain countered, landing a strong right to Obama's jaw, saying he would waste less of taxpayers' money than would his opponent. "I can't waste more taxpayer money than you because I promise not to tax the upper class," McCain cried.

All the while, network analysts were commenting on the consequences of Obama and McCain both wearing the same costume: white boxing shorts and black shoes. "Americans will be talking about their outfits for weeks," CBS anchor Katie Couric said. "I think this will make it harder for the electorate to decide on Election Day."

On the terrorism front, each candidate landed several jabs during the seventh round. "I would initiate nuclear war and blow up the world five times over to protect Americans' security," Obama said as he peppered his rival with jabs to the face before McCain landed a counterpunch to Obama's groin.

As the crowd breathed a collective "OOOOOhhhhhhhhhh," McCain hit his opponent again, saying as a Republican president "I would blow up the world at least six, perhaps seven times to protect America from terrorist aggressors -- all of which backs my statements that I would refuse to negotiate with terrorists."

During the mandatory, 2-minute commercial break before the final round, the candidates from their respective corners shouted at one another that America needs to focus on alternative fuels while at the same time feverishly drilling for new oil sources. But many Americans did not see the highly volatile exchange as the networks were airing advertisements for beer, Viagra, or a host of other prescription drugs highlighting Americans' inadequacies.

The final bell rang as the candidates were jibbing and jabbing about their plans for victory in Iraq.