Voter Guide: Do Not Name Sewage Plant After Bush 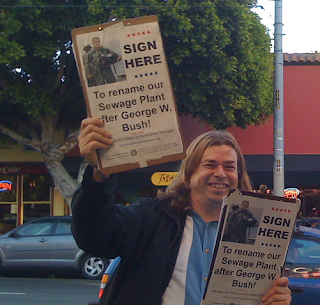 Analysts said the measure's outcome is perhaps more important than the race for U.S. president and its implications for the war on Iraq, the economy, taxes, environment and the makeup of the U.S. Supreme Court.

But renaming a sewage plant after the nation's 44th president is an outright disrespect. Every morning, when the hundreds of thousands here grab the San Francisco Chronicle's comic section to perform their morning constitutional, they would be reminded of the Republican's eight-year term. That is unacceptable.

If adopted, other cities may follow San Francisco's trend, forcing perhaps millions more Americans to relive -- or relieve -- the Bush administration every morning. That is unacceptable.

Then there are the unintended consequences of Proposition R, especially as it applies to children. So for children's sake, vote no on Proposition R.

Children's minds are fragile, and we fear that associating a natural bodily function with the Bush administration could have wide-ranging implications for American potty training. Children may find it more comfortable to stay in diapers. Bigger kids could get into the bad habit of saying they need to take "a George."

This measure is just another ploy by Procter & Gamble and other diaper makers to sell more diapers.

On Tuesday, vote no on Proposition R.