SAN FRANCISCO -- (TYDN) Johnny Danzig lifts his vodka pint he stole at a nearby liquor store here, gazes at it momentarily before finishing it in one gulp. It's a scene that has repeated itself almost daily for decades. 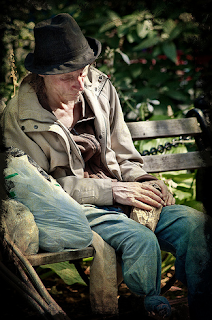 Danzig, and the millions of other homeless Americans like him, has remained unscathed from the world financial crisis, a testament to what the Bush administration says underscores the strength and resiliency of the U.S. economy. Danzig, 52, who hasn't shaved or bathed for months, said in an exclusive interview with TheYellowDailyNews that he was untouched by the faltering economy and housing crisis.

Pointing to his cardboard shanty folded into his stolen shopping cart, he boasted that the banks weren't going to take his house he usually sets up each night in San Francisco's North Beach district. And he says he's been careful not to rack up any debt. He owns all of his belongings including the foul-smelling, disintegrating and lice-ridden clothes on his back.

"I've weathered many recessions. The first one I lost my family, and the second one my house, job and dignity," Danzig said. "This recession isn't really having an impact on me."

President Bush, in an exclusive interview with TheYellowDailyNews, said the example of Danzig and millions of others like him shows that the economy is strong, that the recession's impact is not even touching a growing segment of U.S. society.

"Let this be a lesson that the economy is strong, that this downturn has bypassed millions of Americans," Bush said. "And every day countless more are added to the list of Americans bypassed by this faltering economy that the Democrats created."

"Clearly, the ranks of the homeless are beginning to swell, and this shows that the Bush administration has done a tremendous job shielding more and more Americans from the recession," Jeffrey said.