WASHINGTON -- (TYDN) Sen. John McCain proposed an anti-flag burning law late Sunday in what Republican strategists and many analysts acknowledged was a surefire way to heal the faltering economy. 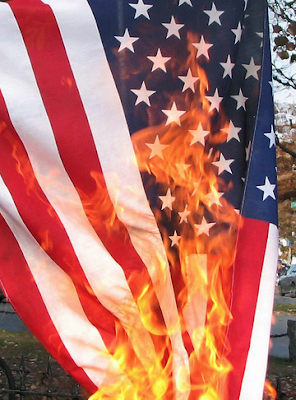 Futures on the New York Stock Exchange soared 500 points late Sunday after McCain's proposal blindsided his presidential rival, Sen. Barack Obama, who instead was focusing on proposals for job creation and ending the war in Iraq. Later in the day, Obama spent hours trying to recover from the McCain proposal, which bumped McCain's poll numbers to a dead heat race â.. almost a 10-point jump.

Analysts said it was the first time in U.S. electoral history a presidential candidate proposed a guaranteed fix-all to cure economic hard times with just days before the election. Revisionist historian Harry Jeffers of Cal State Fullerton said the proposal, certain to pass in both the House and Senate, "was the most brilliant economic stimulus package the nation has ever seen."

McCain, after meeting all day here early Sunday with his campaign operatives, unveiled the anti-flag burning package at a time when most Americans' 401k retirement plans and stock portfolios have been decimated in the wake of Congress' blind eye to a free-market system that plundered the economy.

"That the futures market is already soaring on my proposal underscores that our economy's doldrums are over," the swaggering Republican senator from Arizona told supporters at a campaign speech at the Lincoln Memorial. "The destruction of Old Glory cannot be tolerated."

Flag-burning scofflaws face a maximum 10-year federal prison term. Flag burning in public carries a maximum 15 years and flag burning in a group of three or more people is punishable by at least 20 years.

Obama, the Democratic candidate from Illinois, said McCain's proposal was weak. "In our nation, offenders are sentenced to 50 years or more for stealing golf clubs. That McCain only wants to send flag burners away for 20 years underscores that his proposal is weak on the economy, weak on patriotism and won't stimulate the economy as much as he thinks," Obama said.

Despite assurances from McCain that the proposal was an economic panacea, the American Civil Liberties Union balked. The ACLU said the proposal does not provide exceptions for Boy Scouts disposing of worn out flags, or for rape victims whose attackers force them to ignite Old Glory.