SANTA CRUZ, Calif. -- (TYDN) Memorial Day events got underway Sunday and were to continue nationwide Monday to remember the men and women killed in the line of U.S. military duty, TheYellowDailyNews has learned. 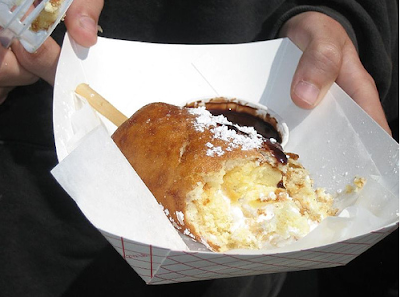 From the deep-fried, chocolate-covered Twinkie stand along the boardwalk here, to the nation's strip clubs, crack houses, auto lots and swap meets, Americans old and young celebrated the nation's history of perpetual war.

At the carnival along the beach boardwalk here in Santa Cruz, about 100 men, women and children in line to pay $5.50 for chocolate-covered fried Twinkies bowed in a moment of silence to honor the fallen.

"I'm so thankful to those who have given their lives, who have given us Americana, to those that have fought for me to be here with my children to taste the American Dream," said 26-year-old James Garrett, who travelled 300 miles from Bakersfield, Calif., to be the first in line at the Twinkie stand with his 6-year-old twin daughters early Sunday.

At 325 pounds, Garrett was one of the svelte in the fried Twinkie line. He was among the few here who mustered enough stamina to pound his chest as a squadron of Blue Angels fighter jets roared overhead. "This is America," he shouted as he chomped into two fried Twinkies he mashed together, a delicious concoction he dubbed the "Artery Fogger."

Memorial Day, once the unofficial beginning of the summer travel season until gasoline prices became out of reach to most Americans, is a solemn day to remember the dead, those who were cut down on the shores of Normandy, those who were blown to smithereens at Pearl Harbor and those felled by roadside bombs in Iraq, Afghanistan or wherever lands to which U.S. soldiers were dispatched in the name of freedom.

Jason McTavish was giving his thanks while at the Crazy Horse Saloon strip club and cat-house just outside Las Vegas. The 40-year-old married father of three, fresh from being serviced by a 15-year-old runaway girl, slowly raised his shot of Jack Daniel's in remembrance. "Another round," he said. "Bring me another girl."

McTavish, like the car buyers, the flea market shoppers, the heroin addicts and short-order cooks honoring those who paid for their freedom in blood, were unaware that Monday marked the 140th observance of Memorial Day in the United States. The first was in 1868, when veterans of the Civil War designated a day in May to honor "the memory of our heroic dead."

President Bush, responsible for the 4,081 celebrations to remember U.S. soldiers that died in the five years since he started the perpetual war in Iraq, was repeatedly interrupted by his handlers as he spoke to a cheering crowd at Arlington National Cemetery. "We are here to honor the 4,081 men and women who gave..."

On the advice of his speech writer, the president continued after several interruptions. "We are here to honor the more than 4,000..."

Meanwhile, in South Beach, Miami, Jordan Belachemy had just driven his new 2008 Hummer off the lot. "I wouldn't be able to do this if our boys weren't out there in all corners of the globe driving around in their Hummer's," Belachemy said. "And some of those Hummers even have armored plating. How cool is that?"

More than 3,000 miles away, in San Francisco, the 325-member staff of TheYellowDailyNews put their pencils and phones down and took a moment of silence. Each staffer gave thanks that Saddam Hussein was executed in 2006 and no longer a threat to their livelihoods.