HONOLULU -- (TYDN) Security officials on Sunday announced new anti-terrorism security measures for U.S.-based airports and passenger flights, standards the U.S. government said are likely to stave off a hijacking, bombing and "another September 11." 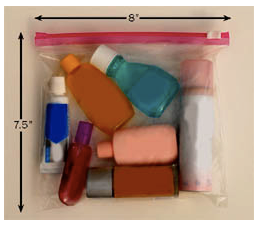 The measures, one of which require passengers to power on their laptop computers in front of Transportation Security Administration officials when travelers are at airport security checkpoints, is expected to dramatically reduce the number of bombs masquerading as computers.

"This new safety feature ensures the safety of our airlines and flights," said Michael Chertoff, the departing chief of the Department of Homeland Security. "Instead of these lethal explosives detonating at 30,000 feet and wreaking havoc in the skies, any explosion will occur in the airport, at the security checkpoint, hence ensuring the safety of fliers."

Another of the sweeping security measures are new rules forbidding large packages of lotions, liquids and gels. Instead, fliers can carry on 3.4-ounce packages of gels, lotions or liquids. The authorities suspect that such substances, when combined, can create explosive devices. Limiting their amount reduces the danger of a passenger concocting an explosive elixir at their seat or in the lavatory.

What's more, the potential explosive nature of the gels, lotions and liquids is neutralized when they are placed in a plastic sandwich bag, a new requirement hailed by security experts and Chertoff. "These bags, which can keep a sandwich safe, will also help us stave off another September. 11," said Chertoff, who was addressing reporters here at the Honolulu International Airport.

Brian McTernian, a security expert with GSML Security Pros, applauded the far-reaching, new security measures. While slicing his burrito with a plastic knife obtained from the La Cucaracha concession stand next to a Hawaiian Airlines gate inside the Honolulu airport, he applauded Chertoff's leadership.

"We think this should prompt resurgence in the ailing airline industry," McTernian said. "People have been staying away from flying, thinking it was too dangerous."

Other security experts said the new measures will compliment others adopted immediately following the Sept. 11, 2001 terror attacks. Industry insiders suggest that as many as 29.3 hijackings have been avoided under guidelines requiring airline bag and passenger checkers to ask fliers whether they have planted a bomb in their luggage or in somebody else's luggage.

Other safety features, including demanding fliers to show their identification perhaps dozens of times upon entering the airport, has stopped as many as 45.7 hijackings, the government said.

Having to display your driver's license or passport to the bag checker, the TSA official at the back of the line at the security checkpoint, then show it again to the official right before you go through the metal detector and again to another official right afterward "is a genius safety measure," said security expert Hans Blixson, of Craft Screening Systems.

"And showing your ID again when you get your boarding pass and again when you board, this prevents somebody from changing their identity at the airport, and hence keeps fliers safer," Blixson said.

But another security expert, Jamison Turkoff, said the ID program is not 100 percent effective. "We've seen a few instances upon which hijackers have smuggled identification-making equipment into the airport and have changed their identities," said Turkoff, president of the airport screening manufacturing firm, Safety First. "The only way to stop this is to perform full cavity searches. We might as well start them now, rather than wait until it's too late."