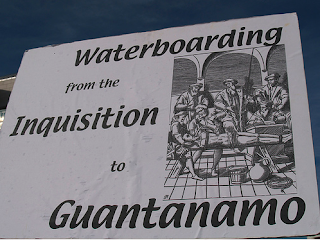 GUANTANAMO BAY, Cuba -- (TYDN) President Bush condemned the Kentucky Derby "as cruelty in the highest order" on Sunday, a day after filly Eight Belles was euthanized on the dirt track when her two ankles shattered.

Bush, who was touring the U.S. detention facility here to pressure interrogators to ramp up waterboarding and other methods to extract more intelligence, urged Congress to begin regulating the Sport of Kings by demanding softer tracks and shorter races.

"It's not acceptable that we, the United States, as the most free and law-abiding nation in the world, stand by and let this form of cruelty on the race track go on unabated," Bush told reporters touring with him here. "What kind of example does this set to the rest of the world?" 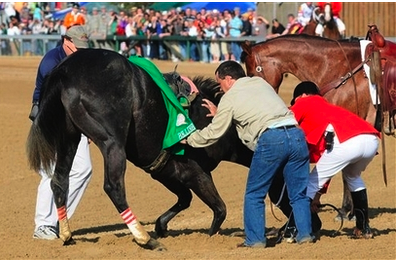 It was the first time that Bush, speaking to CIA operatives at the prison holding some 600 men without charges -- many for years -- publicly acknowledged that the administration was pushing its operatives to perform waterboarding tactics. "We hope this will be a deterrent to the many innocent and guilty men caged here that we will stop at nothing to cull information in our bid to fight terrorism," Bush said.

Generally, waterboarding is when a person is immobilized on their back. Water is poured over their face and into the mouth and nose, forcing the subject to experience the process of drowning. A gag reflex is prompted as is a sudden feeling that death is near.

Meanwhile, filly Eight Belles came in second at the Kentucky Derby on Saturday. She was euthanized when she collapsed after her front ankles fractured and ripped through the skin after the wire. The decision to execute Eight Belles was "the right one," said derby veterinarian Larry Bramlage.

"Some people don't think it was the right thing to do," Bramlage said. "But this horse's racing and mating days were over."

Funeral services were pending notification of next of kin. Glue companies were jockeying for the remains of the 1,000-pound thoroughbred.

Jockey Gabriel Saez said he heard a giant pop before he was thrown from the 3-year-old about a quarter mile after the finish line. "I'm glad I didn't break my ankles," he said.

"Hell, she paid $10.60 to place, and Eight Belles is who I bet," said Jason Dorringer, a 31-year-old unemployed mechanic who was spending his winnings at a local pub not far from Churchill Downs.

John Roberts plopped down his last $100 on Eight Belles to win. Roberts, 45, was just laid off from his programming job, and his wife recently threw him out of the house.

"They should have shot that pig before the race," said Roberts, as he combed a Dumpster outside a local pub not far from Churchill Downs.