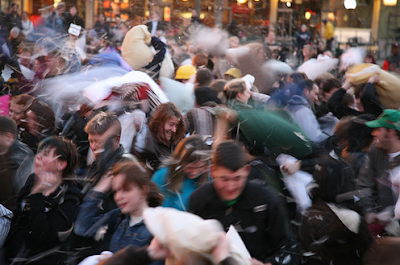 The justice's 4-3 ruling makes California the nation's only state to outlaw marriage. The high court's decision was in response to a lawsuit brought by gays and lesbians challenging a 1977 state law defining marriage as being solely between a man and woman.

Demonstrators broke windows, blocked traffic, overturned cars and many of them fought and ridiculed one another outside the high court's chambers following the justices' decision. Analysts predicted the explosive ruling is expected to play a key role in the upcoming presidential elections, and could force other states to re-examine their marriage laws as well.

Gay and lesbian rights groups decried the decision, saying the court went too far. Conservative groups, who were seeking to protect the historical definition of marriage, said the decision was a reasonable compromise.

"Had they legalized homosexual marriage, what would have stopped the courts from saying you could have multiple spouses, or marry your dog for that matter?" said Marriage is Between a Man & Woman Coalition spokesman Hector Cramdon. "We will not tolerate the besmirching of the traditional form of marriage."

One injured demonstrator, Jonathan Ursmillano, refused medical treatment after he was pelted with rocks by demonstrators. Divorced four times, the president of No Marriage Now said he thought his ribs were broken and suspected he had a concussion. But Ursmillano continued howling through his megaphone.

"Celebrate. Take heed. The Supreme Court is your savior," he screamed. "Blessed are the justices. Blessed are you."

Chief Justice Ronald M. George, writing for the majority, recognized that the decision overturned the court's precedent-setting ruling 60 years ago when it was the nation's first court to nullify a law banning inter-racial marriage. Thursday's decision, he wrote, "ends the inherent bias in the marriage system, where one group of people can marry, and another cannot."

In a sharply worded dissent, Justice Marvin R. Baxter wrote for the minority in favor of same-sex marriage, suggesting it was a panacea for societal ills.

"The elimination of the ancient, social institution of marriage between a man and a woman would save millions of California's men billions of dollars in alimony," he wrote. "Rates of domestic violence, alcoholism, suicide and other disturbances, known and unknown, likely would decrease dramatically."

Legal scholars, meanwhile, applauded the ruling, saying the high court stuck by the Constitution and leveled the playing field for all. Marriage counselors, however, deplored the decision and said they would seek a rehearing.