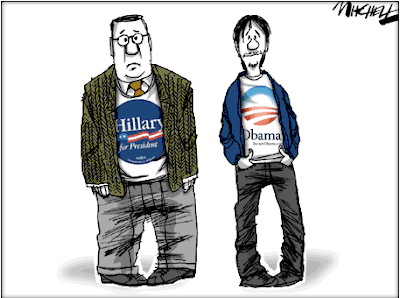 The key difference between the New York senator and the Illinois senator is that the former is a white woman and the latter, a black man, according to a month-long investigation by TheYellowDailyNews, which examined thousands of campaign proposals, primary debates and speeches. The conclusion, for the first time, shows that the run for the White House has historic implications never seen before in U.S. primary history: that the Democratic Party must weigh race and gender in a contest devoid of substance or issues.

"This is something real to voters," Yale historian Justin Schmendrolo said in an exclusive interview. "We don't know where the candidates stand on the economy, the war on terror, health care and foreign and domestic policy. But the two candidates are deeply divided in terms of race and gender. And that says something."

While Clinton won the West Virginia primary here on Tuesday, it was unlikely she could claim enough delegates and superdelegates to clinch the presidential nomination with just five contests to go in Kentucky, Oregon, Puerto Rico, Montana and South Dakota.

Still, historians suggested that the presidential election in November -- when Clinton or Obama faces Republican John McCain -- will boil down to the candidates' differences on race and gender.

For the first time, voters will be confronted with deciding a presidential contest in favor of either a white man or a white woman, or a white man and a black man depending on the outcome of the Democratic National Convention this August in Denver, Colo., an analysis by TheYellowDailyNews shows.

Historians suggested that the presidential race might neither be decided on party loyalty nor which candidate spent the most money campaigning or by "Who handled themselves better on TV and got more favorable press coverage in general," Columbia University presidential scholar Noam Boamsky said.

"This is an election of historical consequences," Boamsky added. "Race and gender are at the forefront. We haven't seen anything like this since the Civil War."

Even so, analysts had expected Clinton's lopsided victory in the West Virginia primary here Tuesday. The demographic makeup of the state is 95 percent white.