WASHINGTON -- (TYDN) Sen. Hillary Clinton, her presidential aspirations hanging by a thread, is readying to attack the GOP on family values and pounce on her Democratic rival for putting the issue on the back burner, TheYellowDailyNews has learned. 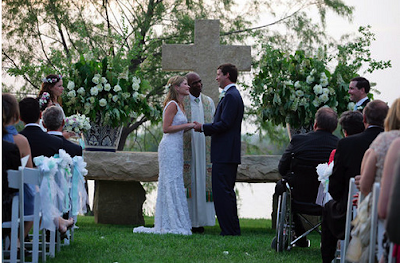 Clinton operatives, speaking on condition of anonymity, said the New York senator was set to accuse Jenna Welch Bush of sexual intercourse before her Saturday marriage to Henry Chase Hager, a graduate student and son of a former Virginia lieutenant governor. The explosive allegations could undermine the GOP itself, undercut the credibility of her father President Bush, and alter the course of the 2008 presidential campaign.

One operative suggested that Clinton, perhaps as early as Monday, was to declare that the president's daughter, wedded at her father's Texas compound in Crawford, was pregnant when, wearing a white dress, she walked down the aisle before 200 friends and family members.

"She kind of had a tiny bump on her belly," according to one guest, who spoke with TheYellowDailyNews on condition his identity not be published because of the sensitivity of the topic. "But it could have been all the pigs in a blanket. Those things were moving like hot cakes."

Clinton's allegations, to be released from New York as the senator begins a whistle-stop tour in an effort to help bolster her flagging presidential bid with six states to go, were met with stark criticism from rival Barak Obama, the right and GOP presidential nominee John McCain, the Arizona senator.

"Is this the same Senator Clinton whose husband had oral relations with a young intern in the White House?" McCain asked in an exclusive interview. "I have family values. I value them."

McCain spent Mother's Day criticizing Obama and Clinton for never being in the military or "held captive in a tiny cage with bamboo shoots shoved up your fingernails in Vietnam like I was." He discussed Clinton's strategy after it was first disclosed on TheYellowDailyNews' Internet site late Sunday.

Democratic strategists applauded Clinton's tactics. In an election season devoid of substance, they said the allegations put Obama and the White House in a Catch-22.
"We think she may be able to eke out a victory. This is brilliant," according to one strategist, who spoke on condition of anonymity. "If Obama doesn't weigh in on this, he'll be seen as weak on family values. If he does chip in, then he's following Clinton's lead."

Even Republican strategists noted that the 26-year-old Jenna Bush's silence on the matter could imply guilt. "If Jenna Bush or her father speak out on it, that might lead to charges that Clinton has the upper hand, or that Jenna has something to hide," according to one presidential operative, who spoke on condition of anonymity because he has not been authorized to speak publicly on the highly charged issue.

One Clinton campaign operative, who spoke on condition of anonymity, said the candidate hatched the strategy herself early Mother's Day when her daughter, Chelsea, and her husband, former President Bill Clinton, informed her they wouldn't vote for her even if she became the Democrats' nominee.

"She was enraged. But it got her thinking of family values instead of her tacit approval of the Bush administration's Iraq war, the war on terror in general, Guantanamo Bay, the Bear Stearns bailout, the Katrina response, soaring federal deficits, the mortgage meltdown, tax breaks for the rich and unbelievably high gas prices," the aide said. "She needed something to differentiate herself from Obama, and it boiled down to family values."

Obama campaign operatives on Sunday said they were mulling a response and would have nothing to say officially until Monday. Still, one Obama insider, speaking on condition of anonymity, said Hillary Clinton is attempting to get the public to "stop thinking about her husband getting it on with intern Monica Lewinsky in the White House and instead focus on Jenna Bush consummating her marriage."

"There's a lot of people here in Washington who applaud that strategy," the operative added. "That might have some appeal with undecided voters."