WASHINGTON -- (TYDN) Thousands of protesters were injured and arrested here Friday after the U.S. Supreme Court sanctioned polygamy as lesbians, gays, and straight women and those unsure of their sexual identity objected to what they decried as "unconstitutional marriages unavailable to them in this form." 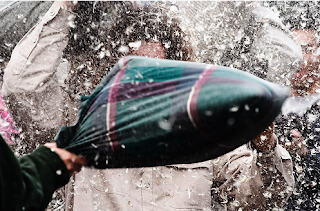 Secret Service agents reported the arrest of 4,963 protesters and 986 hostiles who were hospitalized, many with serious injuries after riots broke out in front of the high court's chambers here.

The high court, ruling in a Texas case brought by 19 husbands of 386 wives, declared that the Equal Protection Clause of the U.S. Constitution granted these men the right to marry as many women at the same time as they wished.

A lower court said such arrangements went against the moral fabric of the institution of marriage that existed since the beginning of mankind.

Chief Justice John Roberts, writing for the 9-0 majority, said that the Constitution guaranteed men the right to marry, notwithstanding how many women and children were at stake. "The male species, with his infinite wisdom, and blessing from God, retains the authority to as many wives as God sees fit," Roberts wrote for the court. "God says there are no limits."

The Gay and Lesbian and Straight Women Coalition objected. As many as 300 of their members were hospitalized after they were beaten by police here after the court's decision barring them from having an infinite number of wives, husbands or partners.

Many women threw Molotov cocktails as they protested the high court's decision that did not allow them to practice polyandry. "When will the courts recognize that we have the right to marry as many men at the same time as we want?" asked Pat Smith, a spokeswoman for the Same-Alternate Sex Coalition Now Campaign. "That's bullshit that men can marry as many women as they want but women, gay women and gay men cannot marry as many as they want."

Texas civil servants urged the court to ban the practice of polygamy after hundreds of the men's children were impregnated at an early age of perhaps 13 or 14, many inseminated by their fathers

"That fact does not interfere with these men's rights to practice polygamy, a generally accepted practice in separatist's parts of the Christian religion and throughout Texas and Utah," Roberts ruled. "These children were well fed, housed and generally taken care of."

The biggest protests were in the Castro District of San Francisco, where gays and lesbians had been seeking the right to marry multiple partners.

The California Supreme Court ruled two weeks ago that gays and lesbians had a right to marry just one same-sex partner. But the protesters said the decision did not go far enough because multiple nuptials were not allowed under the historic ruling.

Dikes 'R Us Club spokeswoman Pat Worman was outraged by the high court's decision. "Once again, straight men get all of the benefits," Worman said. "The right to marry is the right to marry and we should be able to marry as many woman as necessary."

Pro-marriage groups applauded the high court's decision. "That men can have multiple wives is what we've been fighting for," Les Bowman, a spokesman for the Marriage Now Institute, said in an exclusive interview with TheYellowDailyNews. "Screw the lesbos and fags. They can't reproduce and without that, society is dead."