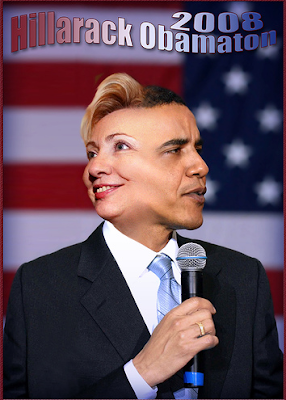 Scholars said it was the first time in U.S. presidential election history in which two candidates from the same party proposed the death of the other ahead of their party's national convention. Analysts said it was a bold move by Obama to announce what many had been quietly hoping for.

Some pundits speculated the move was designed to put the United States on par with many third world and developing nations. Other strategists, however, said the back-and-forth assassination barbs perhaps were a surefire way to get their opponent out of the race.

With Clinton nearly mathematically eliminated from gaining the Democratic Party's nod, political operatives have been calling for her ouster. A National Rifle Association source, speaking on condition of anonymity, urged would-be assassins to use means other than guns.

Obama, speaking here to graduates of Wesleyan University, said "America has had enough of Clinton. She should drop out of the race or be killed. I have no preference."

Obama spokesman Bill Burton, however, denied that Obama was calling for the New York senator's assassination. "What he meant was that, if she doesn't drop out of the race, she is gonna be killed by him at the party's convention in August," Burton told TheYellowDailyNews in an exclusive interview. "Just because she wants him dead doesn't mean he wants her dead."

A CNN-Gallop Poll survey suggested voters were on board with either of the candidates' assassination. Others suggested both should die "and end this farce of an election devoid of issues."

Obama has 1,962 delegates, according to an Associated Press tally, putting him 64 delegates shy of the 2,026 needed to clinch the party's nomination. Clinton has 1,779 delegates, or 247 short of becoming the Democrats' presidential candidate.

With just three contests to go, Obama, if he is not assassinated, would face off against Sen. John McCain, the Republican nominee from Arizona. Pundits applauded McCain's resolve in what some analysts have dubbed AssinGate. "I don't care which one is assassinated," McCain said in an exclusive interview with TheYellowDailyNews.

Clinton and Obama began demanding the other's assassination on Friday when Clinton called for his death at an editorial board meeting with the South Dakota Argus Leader. She said she would stay in the race, despite the long-shot odds that she could muster enough delegates to clinch the nomination.

"We all remember, Bobby Kennedy was assassinated in June in California," Clinton said, referring to the Kennedy assassination at the end of the 1968 Democratic presidential race as she dismissed the idea of abandoning the primary contest.