LOS ANGELES -- (TYDN) University of Southern California scientists are to announce Wednesday the discovery of a novel gene therapy procedure they believe could monitor the newest wave of alien immigration to the United States, TheYellowDailyNews has learned. 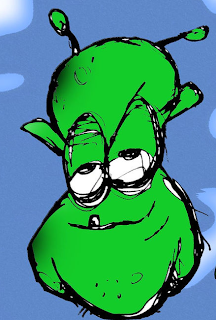 The therapy, developed by USC researchers and associates in Iraq's Fallujah Lab with funding from the U.S. Department of Homeland Security, allows for the identification of immigrants who have stayed beyond their legal allowance by changing the color of their skin to an easily identifiable green after the expiration date of their Visas.

"The largest source of illegal immigrants is formerly legal immigrants," said Terrance Aviviendo, a spokesman for the Department of Homeland Security and a naturalized citizen told TheYellowDailyNews in an exclusive interview. "This is a safe, effective way of making sure that the people in our country are not aliens endangering our population. Illegal aliens in this country will become green, and that's how we'll know their illegal aliens."

New technologies for controlling immigration to the United States have accelerated in the aftermath of a series of calamities that have struck neighboring Mexico and Latin and South America.

Most regularly used immigrant tracking devices -- such as chip implants like those used by many American's in lieu of credit cards and plastic driver's licenses -- have proven too easy to remove. Still, watchdog groups are criticizing the invasiveness of the gene therapy procedure, and they wonder aloud why the government would chose to mutate illegal aliens into the color green.

"It just doesn't make sense why aliens would be the color green," Aliens Against Being Green Coalition spokesman Harold Green told TheYellowDailyNews in an exclusive interview. "This smacks of racism."

Still, the new procedure is administered like a vaccine with a simple synthetic virus, Pox Americana, based on the J. Craig Venter Institute's biofuel bug.

"Gene therapy is finally beginning to deliver on its considerable promise," said Jason Gobackens, the USC gene therapy researcher whose discoveries led to the immigration coloring schematic. "This is a safe, humane approach to monitoring illegal aliens, which will allow all legal residents to breathe a little easier."

While skin color might seem like a difficult thing to change, Gobackens said it's relatively easy to alter a human's most visible identity marker via genetically engineered reprogramming.

"It's just throwing a few genetic switches," he said. "Red heads with pale skin exist because of a mutation to a single gene. We're just remaking people green through the same process that nature would use."

The new advance is particularly notable because of the time-release aspect of the device. The therapy can be calibrated to begin its skin color changing at any time from one week after application until the death of the receiver.

"It all stems from the HIV treatment," said Dr. Harry Toronto, the Nobel laureate professor of virology at Harvard Medical School, and a leading researcher in the team that discovered the long-awaited cure for HIV. "When we figured out how to manipulate the mechanism that viruses use to lie dormant, it opened a lot of doors."

Immigration has become an increasingly important topic in U.S. political circles, in part due to a dramatic increase in refugees fleeing the widening war that has engulfed the continent since the United States invaded Venezuela last August. The situation at the U.S. border, and all across the Americas, has been worsened by a record 11 Category Five hurricanes that have flattened several parts of the continent.

Some analysts estimate that more than 15 million people have applied for entry into the United States in the last five months alone. About 40,000 will be granted permanent visas. Several million more will be given temporary work visas -- the reason why they will turn green when their visas expire, the government said.