LUBBOCK, Texas -- (TYDN) A recently published study concluding watermelon contains Viagra-like components has produced a new legal strategy to defend rape charges known as the "watermelon defense," according to an investigation by TheYellowDailyNews. The report, which prompted watermelon prices to swell, has also dramatically altered the grocery store shopping experience. 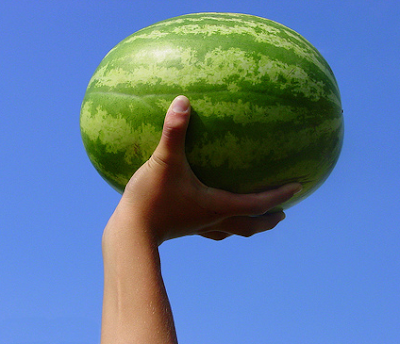 Watermelon-is-like-Viagra, first reported three weeks ago by TheYellowDailyNews, was conducted by Texas A&M University's Fruit and Vegetable Improvement Center. There, researchers concluded watermelons contained the ingredient citrulline that triggers the production of a compound that helps relax the body's blood vessels, similar to what happens when a man takes Viagra.

The breakthrough study, which is being challenged vigorously by Viagra maker Pfizer, has prompted federal authorities to consider banning the red-fleshed summer fruit from minors. Several states are considering making it illegal for registered sex offenders to consume. Local county fair boards across America are canceling watermelon-seed spitting contests.

An analysis by TheYellowDailyNews, the most exhaustive in the watermelon-is-like Viagra context, has prompted criminal defense attorneys to cite the so-called "watermelon defense" to assist in an onslaught of reported rapes of female grocery store cashiers and unaccompanied female grocery shoppers.

"You should have seen the way the cashier smiled at my client, my client who was buying a shopping cart of watermelon," defense attorney Orenthal Cochran told a throng of reporters outside Los Angeles County Superior Court. "The victim in this case, the alleged victim that is, happily sold him 100-plus pounds of watermelon and now she claims she didn't want him to follow her home, break down her door and make passionate love to her after he gagged her."

"When my client is acquitted of these malicious charges, we're going to sue that non victim for everything she has," Cochran added. "We also plan on suing the grocery store for giving out samples of watermelon in the produce department."

Watermelon prices jumped from about 30 cents per pound in the grocery store to more than $1 after the university researchers published their findings in Watermelon News.

Still, other researchers are to report Monday in Psychology Today that the Texas A&M study, Watermelon-is-like-Viagra, has fundamentally reshaped the grocery shopping experience. Researchers found that it took both men and women about 3.5 shopping trips to end their embarrassment when buying condoms at the grocery store, but evidence suggests that it would take as many as 10 trips for watermelon or more.

"When men or women pick up Viagra at the pharmacy, it's a clinical setting and nobody but the pharmacist knows what they're buying," said Gerald Hooliohan, a Penn State University scholar who wrote An Essay Concerning the Aftermath of the Watermelon-is-Like Viagra Study: A Real World View.

Growers, meanwhile, were scrambling to increase the amount of citrulline, the Viagra-like component, in watermelons. Paper bag manufacturers were researching bag strength to determine whether they could produce a large, grocery store brown sack to conceal the unease of watermelon ownership caused by the Watermelon-is-like-Viagra study.

Texas A&M declined comment on how the university uncovered the discovery. But university sources, speaking on condition of anonymity, told TheYellowDailyNews they are expected soon to release a ground-breaking study on the sexual benefits of carrots and cucumbers.