BEIJING -- Olympic female athletes suspected of being males are to begin being tested Wednesday at a gender-determination lab here to confirm their status, TheYellowDailyNews has learned. 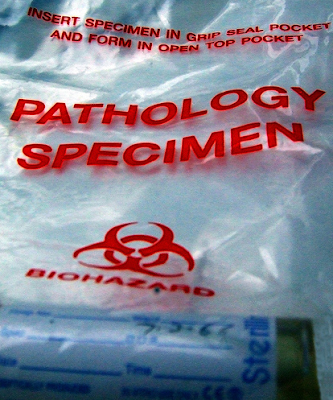 Gender verification tests emerged in the 1960s when Communist countries in Eastern Europe were thought to be using male athletes in women's competitions. The tests were used at the Olympics for the first time at the 1968 Mexico City games.

But critics, recalling "Crotchgate," decried the accuracy of the tests.

The critics noted that U.S. female gymnast Pat Smith cleared a gender test. But she was exposed as a male during the 1996 Atlanta games when her penis flopped out of her leotard and dangled during the ending of her woman's floor exercise.

NBC was fined $550,000 for repeatedly airing what the Federal Communications Commission decried as an "unfortunate uniform malfunction." Encyclopedia Britannica, capitalizing on the episode, coined the phrase "flip flopper" in the controversy's aftermath.

Some linguists suggested the meaning of that phrase has mutated a long way from its original description of a female gymnast whose penis flings out of a leotard during an Olympic floor exercise. Today, the phrase describes a politician altering views â.. although revisionist linguists maintain the meaning of the phrase has gone virtually unchanged.

Despite Crotchgate, the Beijing lab will only test female athletes whose external appearance closely resembles a male's. The International Olympic Committee said athletes requiring testing "know who they are."

"Man-chicks who fail to take the test will automatically be disqualified from their events, regardless of whether they have a penis or not," the committee said in a bold statement.

Dong, the director of the Beijing gender-testing center, said Olympic games dating to 1968 required the testing of all women. He said he was sad to see the changeover.

"There's a lot of women here at the games who obviously don't require inspection. But as a scientist, the more subjects I can get my hands on the better," Dong said.

The committee promised to keep the existence and results of tests confidential. "It's a sensitive issue whether your spouse is a wife or a man, and whether you knew the difference," Olympic Committee Chairman Dexter Polevert said.

Statistics showed that in track and field the difference between the sexes ranged between 10 and 18 percent favoring men. In speed events the difference was as much as 20 percent.

Athletes who fail the initial gender testing could petition for a second, more rigorous examination. Secondary testing would be less intrusive than at prior Olympic games, Dong said.