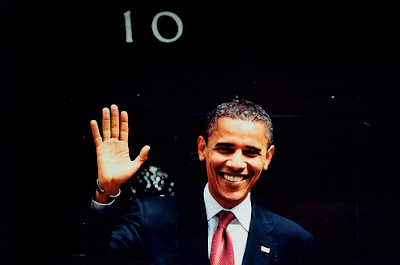 The Illinois senator, in England to try to shore up the white vote at home, was also elected Germany's chancellor and Israel's prime minister as part of his week-long, overseas whistle-stop tour to demonstrate his allure worldwide. Arizona Sen. John McCain, the Republican candidate for U.S. president, chided Obama "for once again being a flip flopper."

"He's now waffling on what country he wants to lead," McCain told reporters in Arizona. "Whose interests does he really represent?"

Speaking at his new official residence here at 10 Downing Street, the British prime minister, the Israeli prime minister and the German chancellor said McCain's inability to shore up foreign presidencies "underscores why my opponent is likely to lead America, if he's elected, down a perilous, isolationist road to ruin."

Analysts noted that Obama traveled overseas at the beckoning of McCain, who had criticized the senator for his lack of foreign policy leadership skills. Obama sought the Jewish vote in Israel and the white vote in Germany and England.

"We were overseas looking to score points at home," the Obama insider told TheYellowDailyNews on condition of anonymity because he has not been authorized to speak publicly. "Christ, judging by the hordes of crowds we encountered, you would have thought he was David Hasselhoff."

Obama, who also flew to Iraq and Afghanistan, resigned the presidencies he won in those war-torn nations late Sunday, saying his power could be watered down if he assumed too many presidencies.

"It's because he doesn't have a policy for us to win the war there. The girly man wants to withdraw the troops in 16 months," McCain said. "Using Somalia, Yugoslavia, Korea and Vietnam as a our guide, withdrawal usually and eventually amounts to failure. I would never withdraw or refuse a presidency."

Latinos, noting that Obama failed to travel to Mexico, are expected to protest outside his Chicago residence Monday afternoon.

An Obama aide, speaking on condition of anonymity, said Obama had planned to visit Mexico City but canceled when U.S. food regulators said Mexican jalapenos were the source of some 1,000 Salmonella illness in the United States. Ten contestants at a jalapeno-eating contest are under quarantine at a local New Mexico hospital.