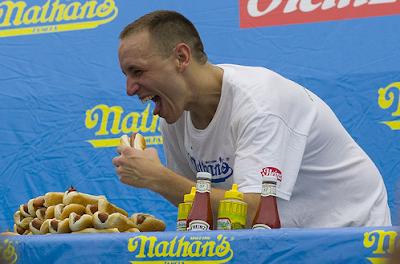 Joey Chestnut, who consumed a bowel-popping 59 hotdogs and buns during the July 4 annual Nathan's Hotdog Eating Contest on Coney Island, set world records for the number of hotdogs eaten in one sitting, for the farthest spray in both the throw-up and Hershey squirts category, and for being signed to the largest monetary contract to represent a toilet tissue manufacturer, Guinness Book of World Records officials told TheYellowDailyNews.

Guinness Book of World Records officials made the announcement Friday, three weeks after the historic annual eating contest in which Chestnut, by less than a bite, narrowly edged out his stomach-busting rival, and six-year champion Takeru Kobayashi of Japan, known in America as "Chester the Digester." Henry "The Heartattack" Bulberio came in a close third, consuming 58 hotdogs and buns before losing his meal ticket on spectators in the "spray zone."

The Guinness Book of World Records delayed announcing the results until Friday amid protests over his throw-up projectile measurement at 17 feet 9.1 inches.

Cheesecake eating champion "Nina the Inhaler" last year spewed 17 feet 9 inches, what insiders called a "Technicolor Yawn," after swallowing 12.26 pounds of cheesecake in the Jersey Shores Cheesecake Macking Contest. "Nina the Inhaler," a 125-pound UPS deliverywoman, in a letter to the Guinness Book of World Records and the National Federation of Food Eating wrote that "a review of Guinness' throw-up measurement standards should make us all puke."

A New York federal judge, however, tossed "Nina the Inhaler's" lawsuit alleging that the Guinness Book of World Records mistakenly included at the end of Chestnut's measurement "a tiny piece of an unknown substance that microscopically measured out 'Nina the Inhaler' for the throw-up projectile crown."

U.S. District Judge Felix Frankfurter ruled a forensic examination of the substance in question was inconclusive, and that the Guinness Book of World Records' bylaws was silent on how to deal with such a far-reaching and contentious issue.

"It's best not to ask how laws and hotdogs are made," Frankfurter ruled.

Chestnut, dubbed the 24-year-old "Gluttonous Gladiator" who signed a $1 million deal to represent Charmin bathroom tissue, was digesting the news and not immediately available for comment. Sources said he was sitting on a six-figure deal with Preparation-H.